Zhaan: “Am I the only species in creation that doesn’t thrive on conflict?”
Also Zhaan: “My dear, I have kicked more ass than you’ve sat on.”

One of the challenges facing all fiction is to respectfully and accurately portray female characters. In the test to portray women as full beings with their own thoughts and desires rather than stereotyped window dressing, most fiction, especially science fiction, fails miserably. I will discuss how feminist Farscape is and is not in another article, but here, I will talk about the female character Zotoh Zhaan, a character drawn with respect and depth. Zhaan is a complex person who struggles under the central contradiction of her being. 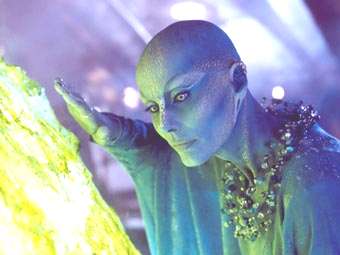 Zhaan is not Farscape’s main female character; that, of course, is Aeryn Sun. But as a supporting character, Zhaan is a fully fleshed-out person and is not simply a plot device in service of a man’s story. She has her own motivations apart from the main story arc which follows Crichton’s story. Zhaan has both strengths and weaknesses, hopes and fears, independence and dependencies, great faith and great doubt.

When I wrote about D’Argo, I focused on the tension between the two lives he wishes to lead. Zhaan’s contradiction is more stark and personal. Her conflict is over who she is—who she has been and who she is capable of being in the future. Existentially, Zhaan is two contradictory selves. Her gentle and deferential traits are one side of her contradiction, her chaotic and violent traits the other side. She is both healer and fighter, sage and savage.

Zhaan is the first alien we see in “Premiere” (1.01) (we do not yet know that Moya is a living ship). She is menacing and stern to Crichton, but then, so are D’Argo and Rygel. She quickly, however, becomes the first person Crichton can trust, and also the first trusted by Rygel, D’Argo, and even Aeryn. It is interesting what makes Zhaan the calm, stable center of the developing family on Moya, especially because Zhaan herself is not entirely calm or stable. 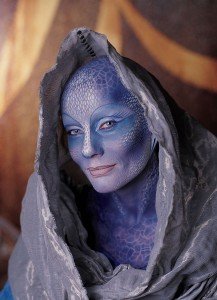 When we think of Zhaan, it is easy to focus on her as the voice of reason—a gentle, giving, spiritual adept full of peace and goodwill. On Moya, Zhaan fills a traditional female role of caregiver and mother-figure. She tends to the wounded, she creates healing remedies, she negotiates compromises. She is more counselor than leader, a patient listener who often defers to others. But as Zhaan tells us, she is soft but not weak. (“Throne for a Loss,” 1.04)

Zhaan personifies all that is good in a priest. A friend to all living creatures, she practices the belief that “the Goddess graciously receives to her bosom all those who pass from this existence, regardless of faith or belief.” (“Die Me Dichotomy,” 2.22) Her gentle strength and grace helps her soothe those she encounters. Her wisdom helps her counsel the others on Moya. She is the shepherd of the flock of lost sheep on Moya. As D’Argo says, Zhaan birthed the family on Moya. (“Self-Inflicted Wounds, Part 2,” 3.04) She sees herself as a mother figure responsible for Chiana and Rygel who she says are “like children.” (“Dream a Little Dream,” 2.08) In that episode and others, she will readily sacrifice herself to protect others.

Mostly, Zhaan is the ship counselor, even a mom. She eases Crichton into his new surroundings with the advice that all good things come with time and patience. (“Exodus from Genesis,” 1.03) She is the first to see that Crichton is good and an asset to the rest aboard Moya. She helps calm Rygel’s desire to kill Crichton with her counsel. (“Self-Inflicted Wounds, Part 1,” 3.03) She is the only one who sees the larger goodness in the small Hynerian. She also is the first to see the good in Chiana, though not before numerous expressions of disgust and impatience over Chiana’s childishness. By accepting that Chiana is, in many ways, still a child, Zhaan can reach her better than the others can. 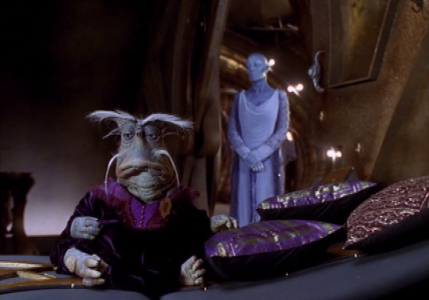 In some ways, Zhaan stands slightly apart from the rest of the group. This is shown most significantly in “Out of Their Minds,” (2.09) when Zhaan is the only one of the Moya inhabitants not involved in the body switching. Even Pilot is switched around. Zhaan is left off Moya trying to play peacemaker to the Halosians—fulfilling her role as the caretaker and peacemaker. She succeeds to a point, but in this episode, like in others, she is the mother figure somewhat apart from the others, being the caretaker while others do most of the fighting and physical struggling.

In other episodes Zhaan is based in her makeshift lab on Moya with the others running about bringing her problems to be solved. This dynamic began in “Exodus from Genesis” (1.03) and continued through to Zhaan’s final episode, “Self-Inflicted Wounds, Part 2,” (3.04) Zhaan is by far the most knowledgeable on matters of basic science and medicine. So she becomes the ship’s science officer and medical officer in addition to ship’s councilor. Zhaan is the matriarch; one of the family, but somewhat apart. She is the crone—healer and wise woman to whom everyone comes for advice and affirmation. 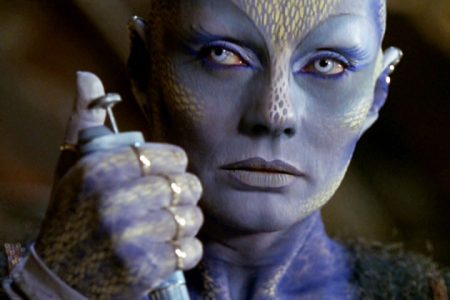 The other side of Zhaan is violence, even though that cuts her deeply because it frightens her. (“That Old Black Magic,” 1.08) Zhaan introduces herself to D’Argo, and us the viewers, as an anarchist—the leading anarchist on her homeworld. (“Premiere” 1.01) She refers to herself as having been a “savage” before she became who we see in Farscape. (“That Old Black Magic,” 1.08) Her cryptic statements are not explained until “Rhapsody in Blue” (1.12) in which we learn that Zhaan is indeed a murderer (unlike D’Argo). Her motives are debatable; such is the nature of political assassinations. We could consider her murderous act one of a freedom fighter, but the consequences for Zhaan went far beyond being arrested and imprisoned.

In murdering, Bitaal, the tyrant ruler of Delvia, Zhaan unleashed not only the wrath of the regime but her own internal wrath. Dark desires rose up within her and drove her into madness. The Delvian Seek was her defense against her own dark impulses. She explained to D’Argo:

My choice to join the Delvian Seek. To become a priest – occurred in the matter of a blink of an eye. One moment, I was lying in my cell. A savage capable of anything. The next, the truth was revealed to me and I knew my true path. (“Thank God It’s Friday Again,” 1.06)

Zhaan spent about 17 cycles in incarceration. It is unclear how many cycles she spent in madness and how many after her revelation and return to the Delvian Seek but apparently most of them were spent “feeling insanity’s grip ebb and flow.” (“Rhapsody in Blue,” 1.12) How she managed to control her dark impulses is a bit of a mystery even to her, but it is a testament to the power of a person’s will that Zhaan pulled herself up from the depths of insanity. (Don’t let anyone tell you that you have no free will.)

The Delvian Seek is not a panacea, however. It is a method of developing spiritual power. But power can both help and harm. On the positive side, the Seek gives Zhaan the power to deal with negativity and turmoil within her, giving her calm stability and an awareness that all life is interconnected. Another interesting gift of the Delvian seek is that it enhances Delvian females’ sensitivity to ionic radiation, allowing them to experience “photogasms.” (‘Till the Blood Runs Clear,” 1.11) It is our first big hint that Zhaan is actually a plant not an animal. 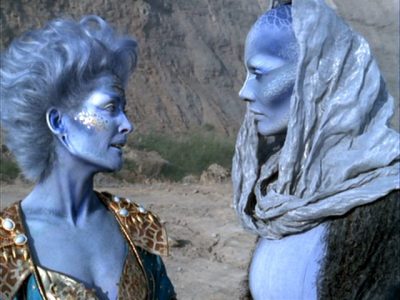 On the negative side, the power of the Seek puts those who work with it at risk. Zhaan explained:

As we train for purity, Delvians often become vulnerable to their own dark impulses. Should it surface, they succumb as if to an infection. (“Rhapsody in Blue” 1.12)

She is, so to speak, playing with fire, and we see in that episode that some Delvians get burned. It may be the case that part of the contradiction in Zhaan’s beingness is the contradictory capabilities of the spiritual power of the Seek. None of the other characters on Farscape dabbles in anything spiritual except for Aeryn late in the series (“Prayer,” 4.18) and then much more deeply in the books. (The relative lack of spirituality is one of the oddities of Farscape.) Only Zhaan, the only one who explores the spiritual realm, has the severe difficulties she has.

Zhaan’s self contradiction and internal conflict may be less from the spiritual realm than from her own self guilt. Her guilt is extreme. She does not mention it often, but her guilt bordering on self-hatred is always there. She has killed. She is a murderer. She is the only person on Moya who actually is a criminal. Far more than the other people on Farscape, Zhaan is psychologically devastated by violent acts and dark impulses. For Zhaan, the problem of evil is a matter of spiritual and mental health. Darkness of thought and spirit drives her insane. Under the stress of impending execution of Litagara that presses on her guilt, Zhaan slips into mild madness. (“Dream a Little Dream,” 2.08) It is a madness that is never far away for her. 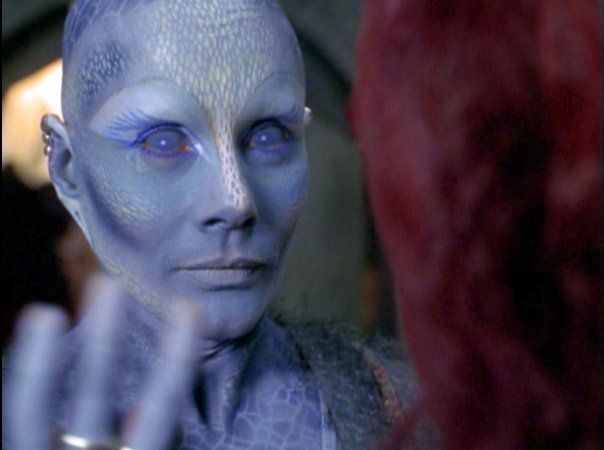 Sewing Her Two Halves Together

Zhaan’s feelings about her murder of Bitaal, specifically her foundational feelings of unworth, are the core of her contradiction. She is both a rebel/warrior and a peacemaker/healer. This contradiction, central to herself, sets her apart from the others on Farscape. For the most part, Zhaan tries to suppress her dark and violent side. On occasion, though, Zhaan slips into or willingly draws on her dark side. She is not always the peaceful priest.

If this young girl dies, I will come back for you and I will most certainly lose any chance I have left of meeting my Goddess.

It is that encounter with the god Kahaynu that supplies the moral verdict on Zhaan. Kahaynu speaks for the creator gods of the Leviathans by declaring of Zhaan:

We are confident that you will protect Moya vigorously against those who seek to exploit her. You are worthy of that responsibility. “Look at the Princess, Part 3.” (2.13) 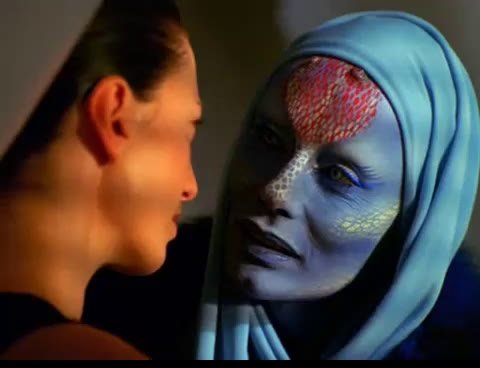 As Zhaan also shows us, the fight to protect the innocent extracts a personal cost on the fighters. Farscape shows us that cost in a realistic and not exploitative manner, including the example of Crichton which I will discuss in another article. That Farscape portrays Zhaan as a contradiction, not as a simplistic caricature of feminine sweetness and light, provides an insight into our own condition as moral and sentient beings.

Life, if we are to live it and love those in it, requires us to face the dilemma of what we are willing to do to protect others against those who seek to exploit them. All that evil needs to prosper is for good people to do nothing. The moral dilemma of what we are willing to do for the things and people we value and love is a precipice—one too many of us are afraid to approach much less confront. In a statement that Kierkegaard would have admired, Zhaan says: “We all visit the precipice. Each one of us must find our own way down.” (“Rhapsody in Blue,” 1.12)

Zhaan can find her way down from the precipice because she tries to bring her two contradictory selves together. She does not thrive on conflict but she is willing to kick ass when it is needed. 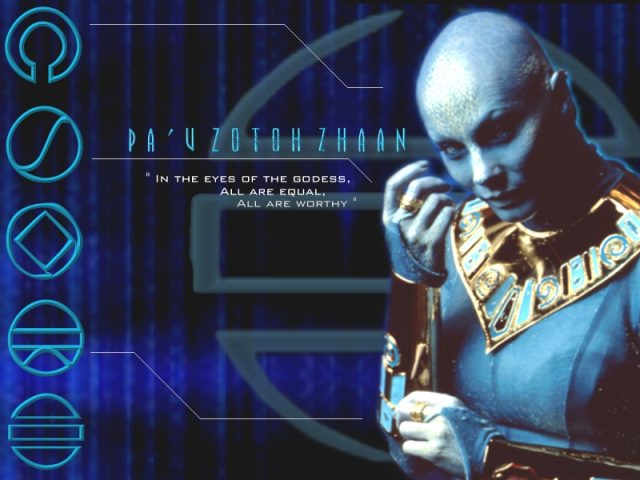 2019-12-03
Previous Post: The Correct Order To Read The Farscape Comics & Why It’s Worth It
Next Post: Factscape – Crichton’s Previous Relationship?