"These aren't the droids you're looking for..." » Farscape Continues Skip to content

“These aren’t the droids you’re looking for…”

One of the things I like about Farscape is that it has very little to do with robots. Now, I have nothing against robots per se. I acknowledge they are soulless bastards but I understand that they were made that way so I don’t hold it against them. My problem with robots is that they have become a prop for bad science fiction plots. Some people like hard science fiction that focuses on science and machines and that’s fine. One of the reasons I enjoy Farscape is because it is not obsessed with technology and its plots are not dependent on machines.

Now, you certainly can do interesting and even philosophical things with robots, androids, droids or whatever you want to call them. The nature of personhood is the obvious one, of course. When you have a thing that looks and acts human but is not human, that raises interesting issues. Also, artificial intelligence raises the questions of emotions, consciousness, and ethical responsibility. Much of that ground was covered by Star Trek Next Generation with the character Data. Despite the brilliant portrayal by Brent Spiner, Data became increasingly a self-cliche repeating the same plot devices. Actually, we can go back to the classic book I, Robot (forget the movie version) by Isaac Asimov to see some early exploration of these themes.

Beyond that, I will not go into the history of robots in science fiction but focus on robots in Farscape. These aren’t the droids you’re looking for if you seek gadgety robots, killer app androids, or symbols of technological alienation. Nothing is called “robot” or “android” in the Farscape universe. In fact, the terms are never spoken once in any episode or book. “Droid”  appears only in “They’ve Got a Secret” (1.10). The only artificial beings Farscape has are Diagnostic Repair Drones, or DRDs, and bioloids. 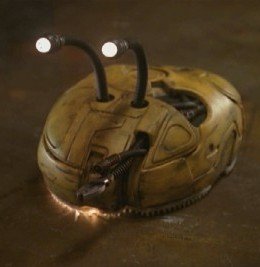 The first alien that John Crichton meets (he understandably assumes that Moya is just a ship) is a DRD. I say alien, not machine, because it is not entirely clear if DRDs are alive like Moya is, or just mechanical. Crichton does  say in “They’ve Got a Secret” (1.10) that the DRDs are not bio-mechanoid like Moya, that they are “entirely mechanical – wires, gears, servos.” Though it is a small plot hole how he knows that ten episodes in. (The middle of the first season Crichton is too knowledgeable and far too authoritative to the others–major plot hole). The DRDs probably are only machines but they do have semblances of personalities, most notably 1812, and other features of being alive. They are in regular communication with Moya and Pilot and their role is to maintain the functions of the living Leviathan. The DRDs are part of Moya, like cells in her body. They do not fend off infections like leukocyte cells (except in “They’ve Got a Secret” (1.10), but they are otherwise similar in roaming Moya’s body keeping her clean and healthy. They are, as the name says, diagnosing and repairing problems with Moya. We learn that every Leviathan produces his or her own set of DRD’s and they are slightly different in each Leviathan. Leviathans apparently build their DRDs as they grow, (“Thanks for Sharing,” 3.7) which implies they are mechanical but this is not 100% clear.

The characters in science fiction most similar to DRDs (aside from the hydra of the Star Wars franchise which has a droid for every conceivable function) are the skutters in Red Dwarf. Skutters are clearly robots and run around the ship functioning as maintenance workers, but mainly serve as running gags or props for other jokes. A biological parallel is in Neal Asher’s Polity novels, where the Prador crab-like alien race, keep dog-sized scavengers on board their spaceships to keep them clean of organic waste–mostly the detritus left by the Prador after they feed. 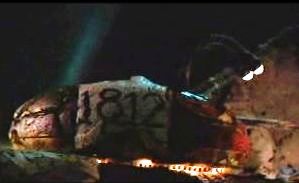 Farscape’s DRDs aren’t plot props used to provide crude humor or just crudity. They are part of multiple plot lines in Farscape, but only in their role as parts of Moya and integral to her health. That is a testament to Farscape’s writers who created a realistic universe and stayed true to it without resorting to plot tricks and worn out tropes. Fans of hard sci fi who are into technical stuff will be disappointed that we never hear any specs on the DRDs, how they function, and so on. But that is in keeping with how the DRDs are a normal part of the landscape on a Leviathan. People think of them only when they aren’t doing what we expect them to do. Kind of like how we think of so much around us.

<< SPOILERS in this paragraph >> The other type of robot in Farscape is a bioloid. We encounter them late in the series, in “Bringing Home the Beacon” (4.16) after which they quickly become a useful plot prop. The writers pull down from the shelf the very common trope of robot versions of people and use it to to for two tomato surprises and a bit of emotional manipulation. Aeryn and then Stark are bioloided (is that a word?) though everyone assumes (naturally) they are the real person. Bioloids are Scarann Technology, who apparently have their own Tyrell Corporation. All we know about bioloids is that the Scarrans can grab someone, put them in a replicator machine, and fabricate a matching bioloid that is part biological, part machine. We also learn that the Kalish also have at least one of these machines and use them to create secret agents for their resistance to Scarran rule. How bioloids are programmed with someone’s memories is unclear, but as we see from the bioloid version of Aeryn, the memories are not duplicated from the captured person but only from what the Scarrans know about the person. This gap in knowledge exposes the bioloid.

There are several malevolent robots our protagonists must face. There are Karak Metalites, that look

like borinium ingots when dormant but become active and eat metal. (“Liars, Guns and Money Part 2 – With Friends Like These,” 2.20) They are reminiscent of the replicators in Stargate SG-1. Then there is the robot that tries to gas Crichton and Katralla in “Look at the Princess,  Part 2 – I Do, I Think” (2.12). But that’s it really. In Farscape, technology, including robots, serve the plots but do not dominate them. The people are the focus.

So, Farscape has no sexy gynoids, no servant droids with British accents, no more-intelligent-than-humans androids, no clumsy robots to shout “danger!”. If you want those, these aren’t the droids you’re looking for. They should have made remote controlled DRDs, though. Oh wait, someone did.