The Message of Farscape

I have praised Farscape as a show different from all others, and a significant aspect of what makes it a show apart is that it does more than entertain: it has a message. It does not hit you over the head with the message, but the message is there from the first few minutes of the series to the second part of the two-part movie at the end of the TV show. (I’ll set aside discussion of the comics for now.)

The message is set up in the first few minutes of the first episode of Farscape, where there is this exchange:

Crichton: It’s not who you are, Dad. I love who you are. It’s being the son of who you are. (They both chuckle a little, but it fades quickly.) Look, I, uh, can’t be your kind of hero.

Jack: No you can’t be. But each man gets the chance to be his own kind of hero. Your time’ll come and when it does, watch out. Chances are, it’ll be the last thing you ever expected.

Jack wins the understatement of the year award. Certainly the last thing Crichton expected was being shot through a wormhole to a distant part of the galaxy. The conversation about being one’s own type of hero was also prescient. Every story needs a hero, and Crichton is one, but the paradox of Crichton is that he is both the everyman and a very distinct type of hero. Crichton is not a superhero or epic hero, nor is he a tragic hero or anti-hero. He is his own type of hero and his heroism has a distinctive character.

<< SPOILERS IN THE REST OF THE ARTICLE >> In the last hour of The Peacekeeper Wars, during the battle on Qujaga, D’Argo is severely wounded. Thinking this is the end for him, he says goodbye to Crichton and gives him this message:

D’ARGO: You got a lot of life to lead, John. Do big things. 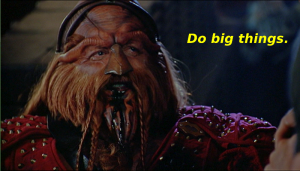 If there is anything that describes John Crichton, it is “do big things.” Though not spoken until the final episode, it is fitting that it is told to Crichton by the first person who interacts with Crichton in  “Premiere” (1.1). On that first meeting, D’Argo’s interest in Crichton was limited to whether the latter’s spaceship could be used to escape from the Peacekeepers. Between that most uncivil first encounter and the heartfelt good bye, all that happened is summed up in D’Argo’s entreaty to Crichton: “do big things.”

At first in the series, Crichton understandably focuses on avoiding conflict and staying alive, as in the “Jeremiah Crichton” episode. Then, like D’Argo, Zhaan, and Rygel, he simply wants to go home, like in “A Human Reaction.” It is in “Nerve” that Crichton’s mission changes, and, not coincidentally, Farscape launches into a new level of science fiction to become the memorable show that it is. 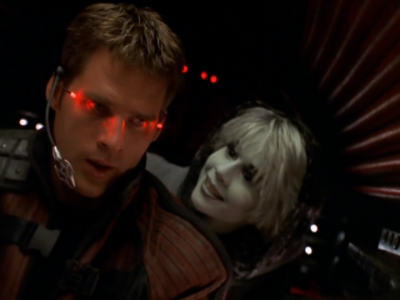 In “Nerve,” Crichton undertakes the first of his Big Things: infiltrating a Peacekeeper base to bring back a tissue graft that is the only thing that can save Aeryn’s life. Crichton succeeds, but not without tremendous difficulty and Aeryn saving him (for the first of many times), and not without touching off the dominant conflict for the rest of the show— Scorpius’s obsession with acquiring the wormhole knowledge hidden in Crichton’s memory.

Apart from a brief moment in “Look at the Princess, Part 2,” Crichton never gives up. Crichton continues to think and do big, not slipping into being a tragic character. In the three-part episode on the Royal Planet of the Breakaway Colonies, Crichton’s motives for agreeing to marry the princess are partially self-serving but this is when his motives begin to change. He was always willing to act to protect his companions on Moya. Now, he realizes that his actions affect not just his companions but millions of people. For the rest of the saga of the Peacekeeper-Scarran cold war, Crichton’s focus is on acting to save as many lives as he can.

Along the way he stormed a shadow depository, gave his life on Dan-Ba-Da to prevent the Scarrans from getting a hold of wormhole technology, destroyed Scorpius’s command carrier (with a big assist from Crais) to prevent him from getting a hold of wormhole technology, traveled through unrealized realities to find the location of Katratzi to rescue first Aeryn and then Scorpius, and pulls off a nuclear destruction of a Scarran base. And amidst all of that he found time to get engaged. She said yes.

Once the Peacekeeper-Scarran war started, Crichton had to make some gut-wrenching decisions. To make the long story short (do watch the four hours of The Peacekeeper Wars) soon after D’Argo tells him to do big things, Crichton gambles everything on a last-ditch effort to stop the war and save lives. His choice is debatable, but it is audacious and only because it was audacious, it brought peace to the region.

In the end, Crichton succeeds not because he has superior powers or is destined to be the savior. He succeeds because he is willing to care deeply, think open-mindedly, never give up, and act big. No one understood that better than Aeryn.

Aeryn often doubted and did not know herself, but she believed in and understood Crichton because she almost immediately recognized what was in his heart and who he was: 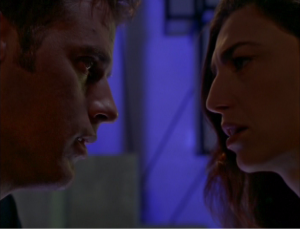 Aeryn: I’m very proud of you.
Crichton: Really?
Aeryn: (as she sits next to him) Yes.
Crichton: Why?
Aeryn: Being Crichton. The Crichton I always knew.
Crichton: Yeah? (Aeryn makes an affirmative sound.) Getting my ass kicked all over the universe?
Aeryn: For getting yourself into a position to get your ass kicked fighting. Resisting. Never giving up.
– Look at the Princess, Part 2

Spot on. At that point, Aeryn knew Crichton better than she knew herself. True, Crichton was never perfect, but Mama Crichton’s baby boy never gave up and he did do big things. That is the message of Farscape for all of us.
.

2019-08-29
Previous Post: The Farscape Episode In Which It All Came Together
Next Post: Poll: Which Ben Do You Prefer?