The Farscape Episode In Which It All Came Together

The Farscape Episode In Which It All Came Together

Some felt the first episodes of Farscape were of lesser quality. Here is the episode in which it call came together for Farscape.

Some people felt the early episodes in season 1 of Farscape the original series were of lesser quality than later episodes. Some say they were uneven or disjoint; some even say they were poor. Whether one agrees with that or not, the episode in which it all comes together for Farscape, as a show and for its characters, was “Through the Looking Glass.” Here’s why. 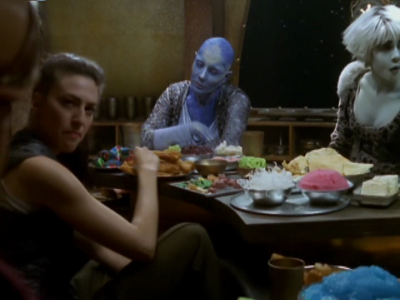 As the episode “Through the Looking Glass” begins, the inhabitants of Moya are in the canteen eating a meal. There is considerable tension in the room as they discuss the conundrum caused by Moya’s pregnancy. Aeryn and Crichton want to stay, D’Argo and Rygel definitely wants to leave and Zhaan is learning toward going. There is also hostility. D’Argo and Aeryn snipes at Rygel, D’Argo snipes at Aeryn, Aeryn snipes at Crichton, everyone snipes at newcomer Chiana, even Zhaan is colder than usual.

Meanwhile, Moya and Pilot are alarmed at the thought of being abandoned and to try to alleviate their friends’ fears. They rashly attempt starburst before Moya is ready. Moya and Pilot’s insecurities reflect everyone else’s insecurities. Their action results in a dimensional schism that divides Moya into four overlapping realities. The dimensional schism mirrors the schism of Moya’s inhabitants. As Crichton remarks in the episode’s first conversation, they all have separate goals.

The failed starburst pushes the characters into separate dimensional realms. D’Argo into Red Moya, Aeryn into Blue Moya, Rygel into Yellow Moya. The colors being symbolic: red for D’Argo’s quick temper, blue for Aeryn’s emotional coldness, and yellow for Rygel’s fearfulness and/or greed. Zhaan remains on the normally colored Moya because she is the most stable and level-headed of the bunch in the first season. Though obviously, Zhaan has her own issues. 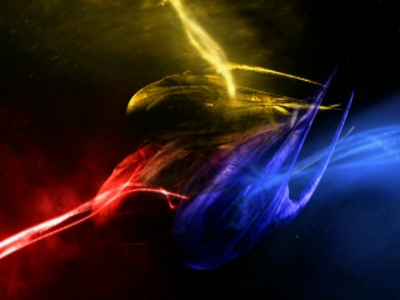 In the midst of the dimensional schism, Crichton needs to travel to each other person who is isolated in his or her own realm and get them all on the same page and bring them together. Newcomer Chiana is the only other person to experience more than one dimension of Moya, but she isn’t ready to contribute to the group. The others overcome the schism by synchronizing their actions and moving forward together. The symbolism is obvious. Their mutual distrust and separate goals are dividing them, but when they work as a team they can overcome any obstacle.

“Through the Looking Glass” is a major turning point for Farscape and its characters. Before this episode, the people on Moya are on edge with each other, mostly distrustful. Through the experiences of this episode, they begin to function together. This is foreshadowed by Zhaan’s comment in the beginning scene that they are under no obligation to function as a unit. They are still under no such obligation at the end of the episode but something clicks for them in their experiences here and they develop a affinity for each other and a desire to work together. From this point on, though there are occasional tensions between them, they work with and for each other, becoming a family. 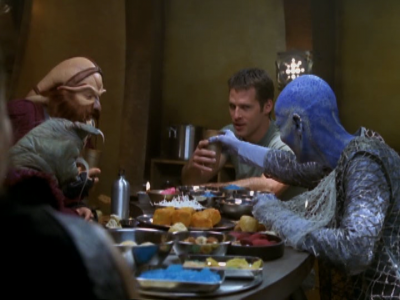 The episode is also a turning point for the original Farscape series. It follows the episode “A Human Reaction” in which Crichton encounters the Ancients and precedes the episode “A Bug’s Life” which launches Farscape’s grand story arc about the struggle over Crichton’s latent wormhole knowledge.

Transcript of “Through The Looking Glass.”

The transcript project is ongoing and more transcripts will be posted when time and money allows me to complete them. Help support the Farscape Continues project.