Continuing the series on species of Farscape, we turn to the Luxans. <you know how Luxans can be clip> Do we know? We meet only three Luxans in the original series: D’Argo, of course, the Orican Nilaam, and Kor Tosko, an ambassador. As usual, Farscape, shows us only what we’d see if we were actually in the action, without extra exposition. What do we know about the Luxans? I’ll explore what we’re actually shown.

Nearly everything we know about Luxans comes from D’Argo so we need to be careful not to assume that what is true about him is true for all Luxans. In the premier episode, Ka D’Argo describes himself to Zhaan as: <I am a Luxan warrior clip> And because we saw D’Argo run around yelling and smashing things, we fall into seeing him and all Luxans as being the stereotypical science fiction warrior race. But of course, Farscape is too smart for that and it loves smashing science fiction cliches. We shouldn’t assume that Luxans are Klingons despite similarities. < Luxan language clip>

The rest of that clip does show that Luxans are feared. <Sheyang response clip > So there’s something to the Luxan warrior thing. But what that warrior society is like we never learn other than D’Argo’s bluster and a few hints of an honor code <I will not lie clip>. It’s mentioned without details that the Luxans fought wars with the Grisoldians and Scorvians. We never hear anything about Luxan politics or society. D’Argo never even mentions his home world, his childhood, or relatives. 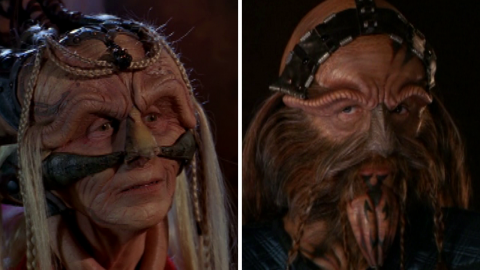 The other two Luxans also tell us little about their people. The episode with Nilaam is the Star Trek-like trope of “powerful force threatens the ship” and about Luxans reveals only that have spiritual wise women called “Oricans” who have some nifty powers. Kor Tosko gets at most a minute of screen time, but we do learn that the Luxans signed a defense agreement with the Peacekeepers against the Scarrans, which to me indicates that the Luxan territories are near Scarran space. How vast they are is unclear but Commandant Grayza indicates the Luxan territories are rich in resources.

Alright, alright, I know you want to hear about the Luxan tongue thing. <tongue thing clips > Yes, Luxans can incapacitate their opponents with their tongues but can still speak normally. Well, that’s all we can say about it. True to form Farscape shows but does not explain how it works. Nor does it explain much else about Luxans. When wounded, the blood must run clear or risk fatal infection. Then there’s hyper-rage. <hyper-rage clip> And at least about this we get some small explanation. <explaining hyper-rage clip>

As D’Argo says, Luxans are prone to violence, but he shows us that Luxans are also capable of being loving and peaceful. D’Argo is unusual for a Luxan—he did marry a Sebacean—though we never learn quite how unusual. We meet a few more Luxans in The Peacekeeper Wars and the comic books, but all soldiers. There have to be Luxan civilians. And every Luxan we meet is male, except for Nilaam. There have to be Luxan women. We just never meet any.

So, we really only get to know one Luxan, but fortunately for us, that Luxan was D’Argo. Hopefully soon we can meet some more, perhaps even D’Argo.