Scorpius and the Nature of Evil

In: Characters
Tagged: Scorpius
With: 0 Comments

“I’m Scorpius.” Of course he is! And of course, Scorpius is the most intriguing of all of the many incredibly intriguing characters in Farscape. Though not introduced until 19 episodes in, Scorpius becomes Farscape’s main villain and arguably one of the best villains in all of sci-fi. But like with everything Farscape, we can’t take Scorpius at face value. A villain? Yes. Evil? Wellll, yes, but it’s not that simple.

Because, if Scorpius is the devil, then I have sympathy for the devil. Who is Scorpius, what makes him tick and what does he tell us about the nature of evil? 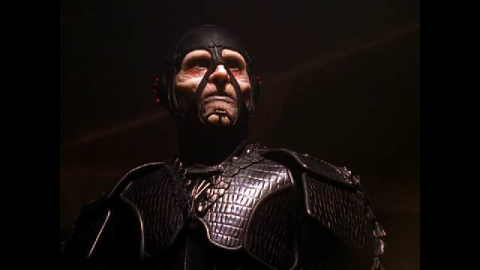 Cold, calculated, a hunter after his prey.

He has his own secret base.

And of course he has a diabolical device.

Yes the aurora chair, Scorpius is presented to us with all the hallmarks of a mad scientist. But we did that schtick already.

Scorpius is different. True to form, Farscape shows us a stereotype, and gradually demolishes it. He’s not mad, he’s not entirely evil, and he isn’t a cartoon villain. Farscape is too smart for that dren.

Is Scorpius evil? Well, is Crais evil? Is Zhaan evil? How about Crichton?  Like others on Farscape, Scorpius is a complex character. Perhaps the most complex character because of his parentage. We know from the start he looks odd, and is dressed odd, but we don’t know why.

Being the great story teller that it is, Farscape doesn’t bore us with excessive exposition, we learn about each character in a natural way as events unfold. Scorpius is thrown at us just like he is thrown at Crichton, with no explanation as to who or what he is.

Our first clue about Scorpius is a comment from Crais. It is also the first mention of Scarrans, who we don’t meet for awhile to come.

Then we get a glimpse of this interesting scene.

Lt Braca is as surprised and confused as us. We have to wait for a Scarran to explain this.

In other videos, I’ve talked about how Farscape characters are divided by inner conflicts, but those are psychological conflicts. For Scorpius, his inner conflict is physical. He is, as Empress Katralla calls him, an abomination. He is physiologically unstable—a biological mix that should not be, almost can’t be. We have to admit that Scorpius carries this tortuous burden with fortitude. But strangely, this is not Scorpius’s biggest burden or concern. 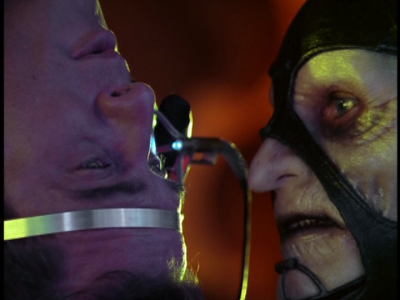 The dominant conflict in Farscape the original series was Scorpius’s obsession with acquiring the wormhole knowledge hidden in Crichton’s memory. What Scorpius puts Crichton through can easily be described as evil. But Scorpius isn’t doing what he does to Crichton out of malice or selfishness or a desire for power. Scorpius has a higher purpose and it’s more than simply revenge.

Crichton does have a purpose—Aeryn. Everyone go “awwww.” But that isn’t Crichton’s only purpose. He reluctantly aligns himself with Scorpius’s purpose. Obviously, a lot of dren passes under the bridge before Crichton becomes allies with Scorpius, but Crichton comes to understand along with us, that Scorpius does what he does for a dual purpose—personal revenge, yes but also a certain amount of altruism.

Scorpius’s purpose goes back to his birth and upbringing, which is not explained until 37 episodes after we meet Scorpius. Even then, Scorpius reveals his past only to the neural spillover Crichton in Scorpius’s mind. Scorpius did a dren-poor job of explaining himself and his motivations to real people, but when showing his memories to the neural clone Crichton, we see the real Scorpius, the person he doesn’t have the courage to show the universe.

Scorpius was a survivor of intense psychological and physical abuse at the hands of the Scarran, Tauza. He is an abomination and is treated as such by his torturer. Scorpius learns strength and patience, and learns of his ability to read energy signatures of others and know when they are lying. Above all, he learns how Scarrans think and the danger that they pose. 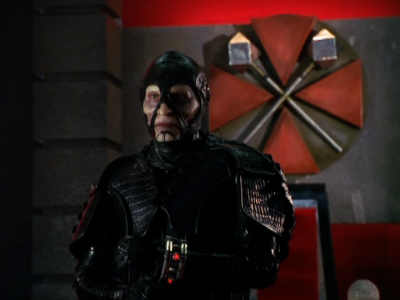 Farscape shows us that villains are not born, they are created. Farscape’s first villain, Crais, was ripped from his home and forced into the Peacekeepers. Scorpius was ripped into existence and shamelessly used by Scarrans. For both, the need to survive drove them to serve the Peacekeepers. Circumstances drove both of them to anger and violence, though circumstances do not absolve them from responsibility for their actions. Crais redeemed himself, at least partially. Scorpius has a longer road to redemption and he never quite gets there because he can never quite let go of his self-centered vindictiveness. But I am not kidding when I say I have sympathy for this devil.

Tauza never broke Scorpius. He escaped, and his first mission was to learn about his parents. He went to the Peacekeepers seeking information and they somewhat surprisingly obliged. In an act that went against our impression of a heartless Scorpius, he travels to the planet where his mother was abducted.  It was an act of pure sentiment, rather endearing.

When Tauza recaptures him and inflicts on him the scenes of his mother being raped, Scorpius breaks down in tears. Even many cycles later, at the end of Incubator, Scorpius shows soft-hearted feelings for his mother he never knew. His desire for revenge against the Scarrans is not just for himself but for his mother.

But I also think Scorpius’s fervent desire to stop the Scarrans is also genuine concern for others not just selfish anger. I am struck by Scorpius’s reaction to Crais informing him that Crichton was plotting against him. That is the look of a person deeply hurt, of one who feels betrayed and bereft. When Crichton succeeds, Scorpius’s reaction is also more hurt than anger. 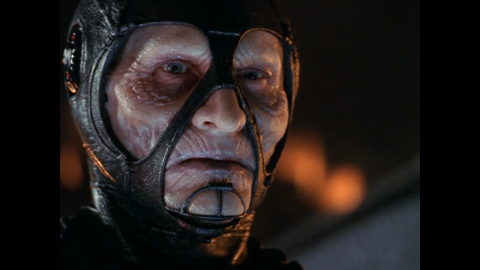 This doesn’t make Scorpius a saint, but it shows he is more than a cartoon villain filled with nothing but hatred. He is practical in his single-minded purpose. Not a sadist but willing to be violent or compassionate when he thought the situation called for it. I can’t defend Scorpius’s methods but I can understand his motives.

He somehow manages to find Aeryn in the crucial episode “Promises,” and definitely saves her life, though clearly as a practical matter in service of his purpose. But Scorpius then becomes an inhabitant of Moya. a sort-of member of the family who saves them in “I Shrink Therefore I Am” and “Coup By Claim.”

Obviously, Scorpius is not the best ally in the world. He plays all sides in his efforts of, well, “diplomatic” engagement to reach his goal of stopping the Scarrans. It is admirable, if you admire sheer bull-headed tenacity. Scorpius does. The one thing he understands most is single-minded purpose.

To the end Scorpius wants to work with Crichton to stop the Scarrans and he is more hurt than angry when Crichton betrays him. But Scorpius has only himself to blame for Crichton’s distrust of him. One’s strengths are also one’s weaknesses and that is very true for Scorpius. His single-minded tenacity keeps him alive and eventually does assist Crichton in stopping the Scarrans, but that same single-mindedness caused him to see Crichton only as a means to an end and capturing and ripping the information out of Crichton as the only way to get it. Scorpius’s bull-headedness kept a wedge between him and Crichton. Instead of threatening Crichton and Earth, he could have done a hezmannah a lot better in soliciting Crichton’s cooperation.

Interestingly in the comic book episode “Gone and Back Again” Scorpius in an unrealized reality does become allies and even friends with the Crichton in that reality. We briefly see another possibility for the Scorpius-Crichton relationship. In fact, the comic books reveal so much more of the Scorpius in our reality, but that will have to wait for another video. Suffice to say that though those books allow us to get inside Scorpius’s mind and hear his thought process, old habits die hard and he remains single-minded. With the Scarran threat mitigated, by the threat of Crichton’s wormhole weapon, Scorpius’s purpose becomes more self-centered on his own survival and here too his ability to [compartmentalize your duplicity] leads him to surprising new alliances. I have no doubt we will see Scorpius again in the Farscape revival, if and when it comes. 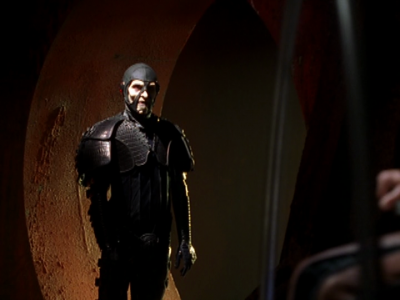 So, back to the question: is Scorpius evil? First, how do we define evil? I mentioned cartoon evil by which I mean a simplistic caricature that portrays evil as “I’m going to get you and your little dog too” stuff. Works for cartoons for young kids. Scorpius isn’t that. He isn’t out to get anyone, doesn’t seek to cause misery in others. He isn’t that kind of evil. George Bernard Shaw had a character in his 1897 play “The Devil’s Disciple” say this about evil: “The worst sin towards our fellow creatures is not to hate them, but to be indifferent to them: that’s the essence of inhumanity.” If evil is indifference, then that is what Scorpius is guilty of. He sees others only in terms of whether they are useful for his purpose. If he doesn’t see you as useful, you don’t exist to him. He won’t go out of his way to harm you, but if you are harmed while he’s achieving his objective, then you are just collateral damage. In that, Scorpius is quite human, all too human. Not an alien monster, but too much like ourselves. And just like in ourselves, there is also goodness in the devil Scorpius. It ultimately comes down to personal choices.