Rygel – The Slug Who Would Be King

Rygel is comic relief, right? I mean, he farts helium for a start. In the first episode, (“Premiere,” 1.01) with lines like, “There was a time when you would have been disemboweled with a dull lashlan spade for half such an insult to me!” Rygel seemed to be typecast as an odd-looking runt there to provide laughs.

I want to focus on the other side of Rygel. Yes, he eats to excess, is selfish, demanding, overbearing, always complaining when he isn’t running away. But as I have explored in essays on Aeryn, D’Argo, and Zhaan, Farscape gave us stereotyped characters in the beginning only to challenge them and rise above the clichés. We are shown cliché-fulfilling comic relief Rygel to set us up to later have that cliché dismantled. (Farscape’s writers did perhaps too often use Rygel as a comic foil, but then, any show needs some of that.)

Rygel is a leader, and at times a good one. We do not often see this side of the Dominar because he does not often have the chance to be the ruler he was born to be. Rygel is a deeply flawed person, and his behavior often reflects that. But Rygel is not just a greedy, selfish laughing stock.

Rygel’s shortcomings in the 88 episodes of Farscape the original series largely result from his long-term exile and imprisonment. Rygel is the legitimate leader of the Hynerian Empire. He was unjustly ripped from his throne and imprisoned and tortured by the Peacekeepers for over 130 cycles before his escape from the Peacekeepers. (“PK Tech Girl,” 1.07) What person wouldn’t be paranoid, distrustful, and selfish after being wrongfully imprisoned and tortured for that long? In comparison, Zhaan was imprisoned only 17 cycles and D’Argo only 8 cycles. Crichton and Aeryn were never imprisoned. Remember too that Rygel was for many cycles the personal prisoner of the sadistic monster Peacekeeper Captain Selto Durka. We do well to cut Rygel some slack.

Zhaan saw the goodness inside the small Hynerian. (“Self Inflicted Wounds, Part 1,” 3.03) Rygel does have a conscience. Not one you would always want to rest a lot of weight on, but it is there. When Zhaan is framed for murder on Litigara, (“Dream a Little Dream,” 2.08) Rygel feels duty bound to save her by representing her in court. He does not have enough conscience to not want to lie to win the case, but through wit and courage he does win the court case and saves Zhaan. Rygel at times insults Zhaan, but he values her counsel and he values her.

Rygel’s regal performance on Litigara was not an aberration. Do not forget, Rygel the Sixteenth is the rightful ruler of Hyneria. He was born into a long lineage of rulers and he was trained to live up to an honorable tradition. When given the opportunity, he rises to that tradition. Not perfectly, certainly not, but it is there within him. 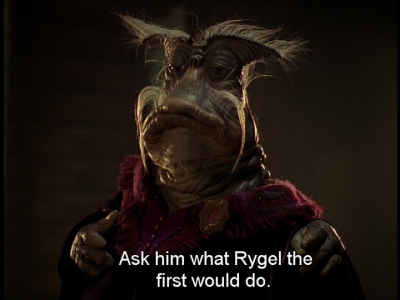 We first see the leader Rygel in “Exodus from Genesis.” (1.03) When Zhaan reminds him of his heritage by asking him what Rygel the First would do, our Rygel rises to the occasion. Rygel saves the inhabitants of Moya by negotiating with the Monarch of the Draks. The Monarch herself says as much and praises Rygel. His companions unfairly fail to credit Rygel for his actions that saved them. I suspect most viewers are similarly unfair in forgetting.

Unfortunately, Rygel lets his success with the Monarch of the Draks go to his head. The next episode, “Throne for a Loss,” (1.04) he overplays his hand and instead of earning the respect of the Tavleks, he earns their greed and their kidnapping. This time, his colleagues save him. Rygel unfairly forgets their actions that save him. At that early stage, the inhabitants of Moya had not yet developed rapport and trust.

Rygel’s leadership instincts return in “Jeremiah Crichton.” (1.14) He learns that the Acquarans were sent out to colonize the planet by his ancestor Rygel the Tenth who then abandoned them and planted a device on their planet to keep them technologically backward. Rygel the Sixteenth is appalled. He does his best to try to explain to the Acquarans, who are not very willing to listen, that they have been wronged and lied to for generations. With the help of Crichton and D’Argo, he convinces them of the truth and does what he can to make amends and help them. Rygel shows a real concern for these people and a sense that as their rightful sovereign, he has a responsibility to them and for them. He declines their worship even when all danger was past, saying to them: “I am not a deity. I am but a worthy being like yourselves. But I am your Sovereign.” Rygel has an instinct for diplomacy—to find the proper balance of words that soothes a situation.


The Real Leader in the Small Hynerian

Nowhere are Rygel’s diplomacy skills more in evidence than in the “Look at the Princess” trilogy. This epic trio of episodes, a watershed in multiple ways for the Farscape grand story arc, clearly shows Rygel’s two very different ways of behaving. By looking at these episodes, we can begin to understand him.

Rygel’s first response when Moya is  targeted by the weaponry of The Sebaceans of the Breakaway Colonies is classic timid Rygel: “By the yotz! Run! Fight! Surrender! Pick one!” (“Look at the Princess, Part 1,” 2.11) But as soon as Rygel hears that the Breakaway Colonies are having a royal coronation, his tone turns to, “I am Dominar Rygel the XVI of the Hynerian Empire! Would you turn away royalty bearing gifts for your new sovereign?” Some would argue that Rygel’s change in tone comes from his opportunistic nature (coronations have food, yes?). I think that misses an important aspect of Rygel that is also true of all of us.

Each of us must continually respond to our environment and things that happen. We have free will, but our responses, both rational ones and emotional ones, are based on our circumstances. Rygel illustrates this in the first few minutes of “Look at the Princess, Part 1.” Two different responses but the same person. His initial panic was an emotional response to circumstances in which he had no good idea of what to do: “ Run! Fight! Surrender! Pick one!” When he heard there was an impending royal coronation, he now had a good idea of what to do: “I am Dominar Rygel the Sixteenth.” He had different responses not because the situation had changed but because he now knew how to handle the situation by knowing who to be in response to it.

See, Rygel is a lot like us—just a shorter and more privileged version. When we are unsure and insecure, we tend to behave poorly. When we know what to do based on past experience and our own planning, we tend to behave well and be fine. For Rygel, when he can use his skills as a leader, his training and experience as a leader helps him to make decisions about what to do,. He knows how to respond to the Monarch of the Draks, to the court of Litigara, and to the Empress Novia because he has experience with such interactions.

With the Empress, for the first time since he was deposed from his throne, he could deal with an equal. With her, he handled himself well. He gained the trust and respect of the Empress and it was Rygel’s deft diplomacy with her that allowed all of them to survive their travails in the Breakaway Colonies. The Empress, like the Monarch, acknowledged Rygel’s abilities even if Rygel’s companions cannot, except for one brief praise by D’Argo. (“Look at the Princess, Part 2,” 2.12) Perhaps that is because Rygel’s companions too many times witnessed Rygel’s insecure side.

Among other times, Rygel acts from his insecurities when “Durka Returns,” (1.15) and when he tries to sell them out to Scorpius. (“Family Ties,” 1.22) Amidst the extreme peril of Moya’s collision with Pathfinder Neeyala’s Research Vessel, (“Self Inflicted Wounds, Part 1,” 3.03) Rygel’s justified fears encourage him to think escape.

Rygel: Why don’t we just escape?
Crichton: Does it ever bother you? Being selfish?
Rygel: It’s self-preservation – and no.
Crichton: What about our friends?
Rygel: What friends? We were thrown together against our will and we’re all just trying to make the best of it until we can get the chance to screw the others and get what we want.
(“Self Inflicted Wounds, Part 1,” 3.03)

Rygel is not entirely wrong here about them being thrown together against their will, but other times he does not agree with this cold sentiment when he does risk himself to save the others. (For example, “Liars, Guns and Money Part 3,” 2.21, “Relativity,” 3.10, and “We’re So Screwed, Part 3,” 4.21)

Another time when the Dominar’s abilities shine through is when he goes to negotiate with Scorpius. (“I Yensch, You Yensch,” 3.19) Rygel shows complete calm and strength in first facing down Scorpius and then the two rent-a-goons and their fake robbery. Rygel stands up to Scorpius more steadfastly than any of the others did, matching Scorpius if not getting the better of him. In so doing, he wins major concessions from Scorpius that eventually allows Crichton to succeed in destroying Scorpius’s wormhole research base. Oh, and Rygel calmly sees through the rent-a goons’ plan (such as it was) and once again saves his companions (alas, Scorpius being one of them). Despite the bizarre and calamitous situation in “I Yensch, You Yensch,” Rygel knew his role, felt secure, and rose to the occasion. (Side note: the full range of Rygel’s gestures and facial expressions in this episode is amazing, a triumph of the art of the Jim Henson Company. These greebols who refuse to watch Farscape because it has muppets are magra-fahrbot.)