Poor Pilot. So loyal. So dedicated. So underappreciated.

The British have a great term, “dogsbody,” meaning a lackey or grunt who does the menial, boring jobs nobody else wants to do. That’s the role of a pilot on a leviathan.

Yes, to understand Pilot, we need to understand that bond and covenant between a pilot and a leviathan. First, we need to remember that his name isn’t “Pilot.” That’s his job title. Every leviathan has a pilot. Well, except for Talyn, but that’s very different. So, there must be many pilots in the universe.

We are told that pilots have multitasking abilities far beyond other species and have a highly sophisticated language, but we learn nothing more about the species in the original series.

We learn that Moya had another pilot before our Pilot and we meet the beleaguered pilot on the leviathan taken over by Kaarvok and we meet the pilot of Elack. But the original series gives us no information about who the pilots are. we are given no background information aside from the flashbacks in “The Way We Weren’t.” That brilliant episode is worth watching in full, and I won’t go into all of the drama that transpires in it; but suffice to say that Velorek took advantage of our young Pilot. 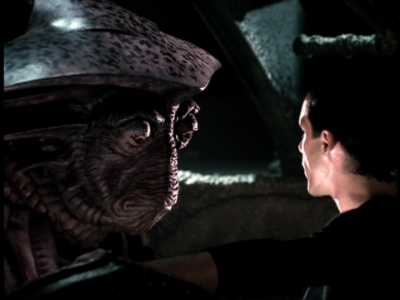 Velorek doesn’t tell Pilot until it is too late that Pilot has signed up for constant physical pain from an unnatural bonding to Moya. For three cycles, including over a cycle since Moya was freed from captivity, Pilot has been in constant pain. How that affected him we don’t know, but we know how he ended it.

Of course, Pilot makes up with Aeryn and they reconnect Pilot with Moya. What everyone learns in “The Way We Weren’t” is that Pilot is just as much an exile as the rest of them on Moya. This is confirmed in the comic books when fate brings Moya and inhabitants to Pilot’s home planet. What happens there, I won’t reveal because you all should buy and read the comics.

The realizations about Pilot’s past don’t drastically alter his relationship with the others. They respect him more, but they still treat him like a servant. In a way, that is what he is, even when he declares


No matter what, Pilot’s primary thought is to serve others.

That thought of what fulfills Pilot and Moya resurfaces later.

Traveling through the stars is Pilot’s dream and is the extent of the ambition in this wonderfully guileless being. Kahaynu called leviathans “gentle beasts” but I think that extends to pilots. Though Kahaynu showed no respect for pilots.

Pilots, at least when bonded to leviathans, are there only to fulfill a role. No doubt, our Pilot’s role is crucial throughout Farscape. As a Pilot, he regulates Moya’s vital functions and he is the channel for communication between Moya and the others. He is never more vital than in the last episode of the original series.

Pilot can do it, but he’s scared. But he’s convinced by an unlikely person.

Pilot comes through and collapses the wormhole. Saving Earth from the Scarrans.

And let’s not forget that it was Pilot, with the help of his merry band of DRDs who built the machine that Crichton used to build the wormhole weapon and make peace. On Moya, there is a family, and it is also a team that works together and does big things, even Pilot, who really is a big thing and the most loyal of friends. 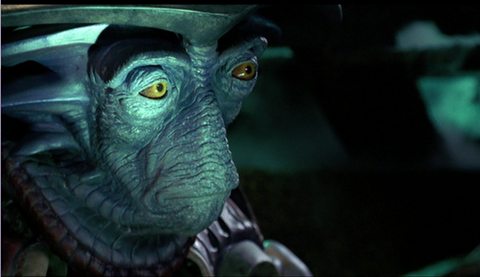