IMDB.com (The Internet Movie Database) has been my go-to source for film and TV information for as long as I can remember. Need to figure out who that actor is in an obscure foreign film from the 1930s? IMDB has it. Heck, pretty much any question about anything filmed or videoed in the past 120 years can be answered by looking in IMDB.com.

To be sure, they run ads for the major media conglomerates, but IMDB has always been a big proponent of indie films and quality over glitz and glam. So when the IMDB editors name Farscape as the #1 90’s Show That Needs a Reboot Now, that’s a big plug with serious weight behind it. These people get it, and they appreciate the wonders they have seen in Farscape.

Also significant is the link on the page to the Amazon Prime page where people can buy and watch Farscape. As I’ve reported previously, getting more viewers on Amazon Prime is the best way to encourage the powers-that-be to fund the Farscape revival on which Brian Henson and Rockne O’Bannon are working. This IMDB plug will hopefully help. 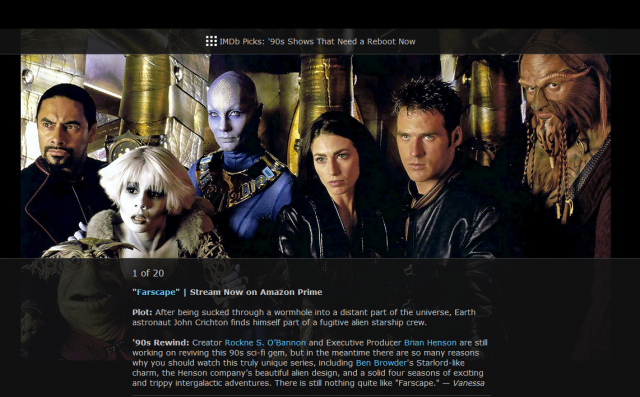