I Have a Theory About Sikozu

I’ve completed character studies on every major character on Farscape save one—Sikozu. In this case, last is least because I neither like nor understand her character. Her actions and changes made little sense to me until one day, a theory came to me. 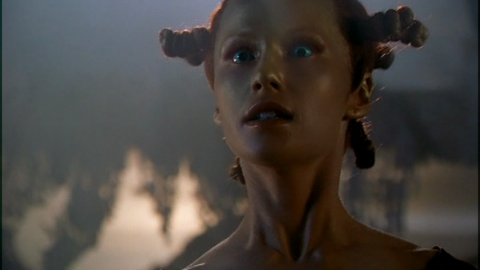 appears at the beginning of Season 4, another bossy red-headed know-it-all like Jool was at first. Also Like Jool, Sikozu is educated in technical matters. Unlike Jool, Sikozu never tries to become one of the family on Moya. Even among the misfits, Sikozu never fits in. Her character never quite adds up, especially with her radical transformation in the Peacekeeper Wars. But again, I have a theory.

Sikozu arrives on the leviathan Elack interrupting Crichton’s attempts to calculate the physics of wormholes. She doesn’t help him. Sikozu doesn’t give, she demands; she declares. That she interrupts Crichton’s research and acts as though she knows better than anyone about spaceships and science is the clue, I think. Obnoxious Sputnik is a parody of a certain type of science fiction fan: the ones who aren’t that interested in characters and plots as they are about spaceships schematics and love pretending they know more than show creators. This scene is telling.

Now, I have no direct evidence from the creators or writers to support this theory, but  David Kemper is reported to have said early in the series, “don’t explain it, just show it.” And I say if you look at the role of Sikozu throughout Season 4, she’s the shrill voice of the pedantic geek never satisfied with what is shown. I think she symbolizes that type of science fiction fan who wants to talk about tie fighter or warp coil specs rather than story and characters. Sikozu is the anti-Farscape character. She doesn’t get it, she doesn’t try.

Rygel puts her in her place.

I think that’s the strongest evidence for my theory.

Sikozu rather quickly develops a fascination for Scorpius and becomes an ally more to him than to everyone else. Like Scorpius, Sikozu is driven by hatred of the Scarrans. So, little Ms Know-It-All helps them in opposition to the Scarrans.

Then we’re told in “We’re So Screwed” that Sikozu is a bioloid and we’re told that bioloids are biomechanical duplicates of real people, but then we’re told that Sikozu is genetically engineered to kill Scarrans, which is a neat trick but who or what she really is is really unclear. She’s not a bioloid like the duplicates of Aeryn and Stark. Instead, she must be an infant, as Rygel says, who has some implanted weapons, which makes Sikozu more like Graza than the other characters. 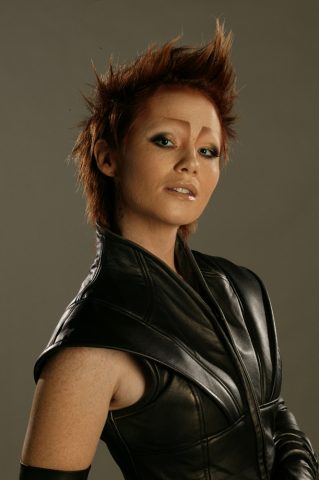 So then what are we to do with Sikozu of the Peacekeeper Wars? I say the target of the satire has shifted from the tech geek to the cyberpunk. Peacekeeper Wars is regrettably condensed and rushed, so all it has time to do is deliver Sikozu’s silly outfits and Flock of Seagulls hairdo. She barely says a thing in the whole film but is frequently seen in her outfit and constant sneer. Farscape is justifiably lauded as a female-centered show but in Peacekeeper Wars, Sikozu is more like the typical science fiction female character: only there to show some flesh and make an occasional throwaway remark

The one plot development for Sikozu is the revelation that she is spying for the Scarrans. Scorpius exposes her and leaves her for dead and we don’t see her again in the film.

We do meet her again in the comics where she now looks like a member of an 80s synthpop band. It is explained that she agreed to spy for War Minister Ahkna in exchange for the freedom of the Kalish, who are now confirmed to have been slaves of the Scarrans. But other than her hair magically growing back, the comics give us no additional insights to her character. She remains the anti-Farscape character who never fits in.

Anyway, that’s my theory, let me know what you think.