Farscape’s best character? Some people are into this guy. Others go for her or her. <I love a girl in gray> But with which character would you most like to party? <margarita shooters>

Yeah, there is that, he’s not real.

Yes, Harvey IS real, and not just to him and Crichton. Obviously, Harvey can be just plain fun 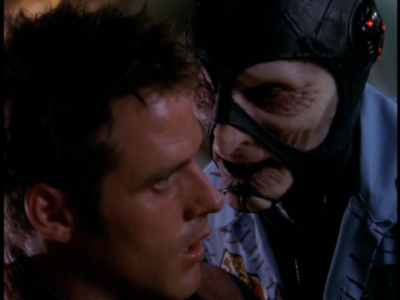 We first meet Harvey as a pizza-wanting apparition that we quickly assume is just part of the insanity of “Crackers Don’t Matter.” Further whispers of Harvey’s presence occur in “Look at the Princess” and “Beware of Dog”

But it is in “Won’t Get Fooled Again” that he first fully manifests.

Yes, Harvey’s job is to guard Crichton as a military asset and acquire the wormhole knowledge placed by The Ancients, with the built-in safeguard of preventing Crichton from harming Scorpius. <Harvey stops Crichton>

But like silicone valley tech companies, Scorpius needs to learn the dangers of untested technology.

< Harvey is a neural bleed>

Yes, Harvey is now his own person and now Crichton can handle him.

<Crichton turns the  table on Harvey>

That moment in the first episode of Season 3 is a major turning point in Farscape the original series. Crichton is empowered. The neural clone is now fully Harvey, a pooka with his own mind, but now a servant of Crichton.


< Harvey called on a whim>

Harvey, having full access to Crichton’s memories, is constituting a new consciousness and personality. I won’t get deeply philosophical here, I’ll do that elsewhere, but it is fascinating how Harvey creates himself as a blend of Scorpius and Crichton. Not the monster who murdered Aeryn, but a new person. Still willful and cynical like Scorpius, but now with the resources in Crichton’s memories he can use to communicate.

Harvey is forced by circumstances to make difficult choices in response to extreme situations, He manipulates scenes in Crichton’s mind because that’s the power he has, much to Crichton’s annoyance.

<no smoking in my head>

Harvey comes and goes, sometimes summoned by Crichton, sometimes popping up uninvited. Both Crichtons, first the one on Talyn and then the surviving one, have to have Harvey removed.

But being the pest that he is, Harvey pops up again. 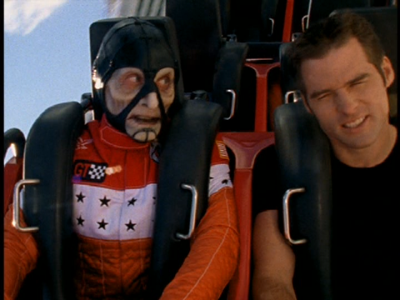 Harvey the funniest character on Farscape retains <total loyalty to Scorpius>. This is, after all, part of Harvey’s purpose. We all have a purpose, hopefully not as limited of one as Harvey’s, because if so, once we’ve fulfilled it, we’re done.

And Harvey is one of Farscape most pleasant remembrance. But with Harvey we do have a body, so to speak, so Harvey really is dead.