Gizmodo Jumps On The Farscape Bandwagon

The 20th anniversary of Farscape – the original series, has offered an opportunity for mainstream corporate publications to wave the Farscape banner. Following Vice’s surprisingly good (though still exaggerated) article, fellow Web tabloid Gizmodo has weighed in with its own paean to the wonders of Farscape.

Clearly written in close cooperation with Jim Henson Productions, the article by Eleanor Tremeer focuses on the enduring popularity of Farscape and the elements that make it such an incredible show. Echoing what has been written on this site, Tremeer says:

“Watching the show today, it’s easy to see why Farscape is beloved, because it is still so truly original. By flinging its human protagonist to the other side of the galaxy and immersing him in alien cultures, Farscape did something no other show has achieved—it de-normalized normal, and normalized the totally bizarre. To us, John Crichton may be the perfect everyman, but to everyone around him, he is the weird, nonsensical interloper.” 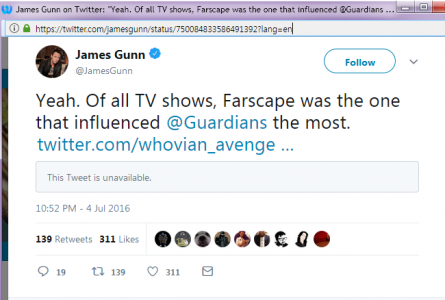 Why, yes, Crichton is the everyman. And absolutely, Farscape remains original and tremendously influential. Tremeer describes, assisted by comments from Ben Browder, that Farscape broke out of the Star Trek stock plots, stock characters mold by developing long-form plots and character development. Tremeer correctly acknowledges that Guardians of the Galaxy was inspired by Farscape, and links to where James Gunn admitted as much. (It is bizarre how some people try to deny it.) Throughout Tremeer’s article she places Farscape in its proper historical context and affords it its proper importance.

Unlike the Vice article, which trumped up an alleged kinky queerness in Farscape, Tremeer never sensationalizes anything about the show. More than mentioning it, as does the Vice article, Tremeer writes at length about Farscape’s creative genius and its emotional and intellectual depth. She mentions, though does not explore, that Farscape does not have the clear distinctions between right and wrong had by Star Wars and Star Trek. She does explore how Farscape brilliantly combined the alien and human aspects of its characters. Indeed, few commentators on Farscape gives due credit to this central quality of the show. Tremeer does mention the romance between Aeryn and Crichton, praising its humanness and compelling dynamic without slipping into sappiness. Similarly, she mentions that Farscape frankly depicted sexuality without sensationalizing it. And again, she waxes eloquently on how much Farscape‘s innovations in storytelling and effects have changed science fiction.

It is a long and well-written article, surprisingly deep and intelligent for a Kinja publication. The article’s biggest flaw is a few unmarked spoilers and the choice of video clips lifted from YouTube that give away crucial plot developments. This is something Jim Henson Productions’ own Farscape YouTube channel wisely avoids. Aside from that, Tremeer gives us a thoughtful and inspiring analysis of television’s greatest show.

There have been media mentions of Farscape at the show’s past anniversary’s but seldom from such high-profile publications. The appearances of a coordinated campaign are readily apparent as Brian Henson continues to ramp up publicity building toward a Farscape revival. There have been over 40,000 readers of Tremeer’s article, hopefully many of those will do more than just drive-by and will also jump on the Farscape bandwagon.