What do we know about Farscape’s three stooges – Stark, Jool, and Noranti?

Farscape’s major characters are all fairly universally loved, even Scorpius. But Farscape’s three stooges are often mocked and disliked.

Is it fair to call them stooges? Well, they are each bumbling comic relief and are secondary characters without much back story or depth. In this, they are quite different from Farscape’s main characters who all have fascinating histories that explain their complex personalities and motivations. Stark, Jool, and Noranti aren’t without some personality but their characters are never explored and we know next to nothing about their pasts. We can still have some interesting discussions about them. So let’s do that. 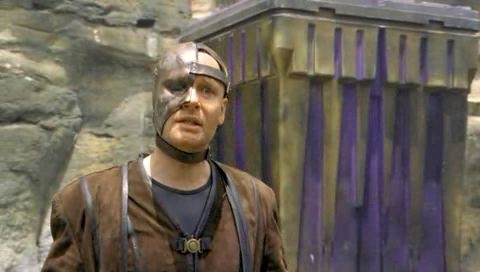 About Stark, we know only that he is of the Banik race and that he is a Stykera. The lack of information available has led to fanciful and false conjecture about Baniks and Stykera on fan sites. We are given only this cryptic reveal.

We never meet any other Baniks so we don’t understand all that Stark means. We do learn later that he is interesting to the Peacekeepers because he is a Stykera.

Stark is more than sensitive to the dead, he helps souls cross over to death. There are hints that this is why he was enslaved and how he now, no longer a slave, supports himself. We learn as late as the end of Season 4 that Stark was on Katratzi, assisting the leadership caste with their death rituals. That was why Scorpius imprisoned Stark and used the Aurora chair trying to extract the secret of the location of the Scarran base that grew the Crystherium flowers.

We know that Stark is, shall we say, a little loosely hung together. This is perhaps because as someone who helps souls cross over, he absorbs part of them, including their memories.

Stark is present or absent from Moya without any rhyme or reason. His motivations are never clear except after “The Choice” when he says he is going to find Zhaan’s spirit. We are never told what he finds and Zhaan is not mentioned again.

Stark certainly is not a hero, though he is basically a decent person. He definitely was at times a detriment to the inhabitants of Moya. I think his character is best defined in the scene in The Peacekeeper Wars when he asks Aeryn …

His reply, “I can stay out of your way” nails it. But then he finally does contribute by being the conduit for the spirit of the head Eidelon and keeping peace alive. Maybe that is Stark’s function in Farscape: the thin li ne between peace and chaos.

Stark was mentally and emotionally unstable the whole original series, only finding internal peace at the end of The Peacekeeper Wars. We see his “this” and the powers that it gave him now gone. Perhaps that power to guide souls and transfer memories was what tormented Stark all along. 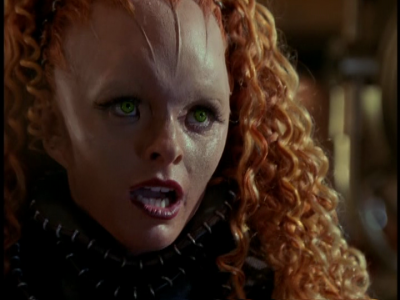 We know even less about Jool and her race the Interons and much of the conjecture about her on fan sites is wrong. Retrieved by Crichton from Grunschlik’s stash of mostly dead bodies, Jool never shows much gratitude for being saved from the freezer. She isn’t terribly good at taking in new information.

Jool and her past are never explored and are barely mentioned. We do know she was educated.

She refers to her cousin as being of the intellectual elite though not whether she is one also. She is knowledgeable on some matters, though she makes it difficult to tell where her knowledge ends and her braggadocio begins.

Jool’s acerbic and condescending personality turns off everyone. The only one who warms to her is D’Argo and after Talyn’s burial we met those two on Arnessk surprisingly friendly with each other. Their kiss at the end of “What Was Lost” surprised viewers. It is only explained by the comic D’Argo’s Lament. This story took place sometime during Season 3 and involves D’Argo and Jool on a supply mission during which they grow close.

Jool finds her purpose on Arnessk, helping the priests there to acclimate to the universe after 12,000 cycles of stasis. It was a noble but fateful choice. The snippets of Jool that we see in The Peacekeeper Wars show that she has changed from the obnoxious snob who emerged from the cryogenic capsule. Jool came to realize she was obnoxious and she grew up. 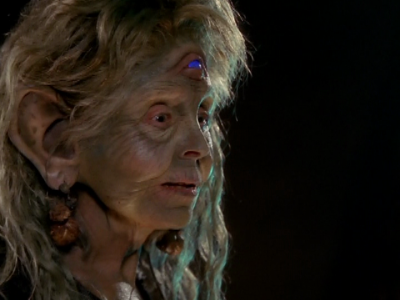 Grandma, Wrinkles, Old Woman. The derogatory nicknames hint at her mysterious arrival on Moya and her general mysteriousness. The stoogiest of the Three Stooges, she is also the most obscure. It is mentioned only once by Braca that she is of the Traskan race. She has a third eye which occasionally glows but what it does is never mentioned until the comics and I won’t spoil that for those who haven’t read it yet.

Much of the fan reaction to Noranti displays the ageism in our culture. Some people assume Noranti is senile or suffering dementia because she is old and ditzy. She’s an alien, is she supposed to act how “proper” humans act? It’s odd that Farscape, loved because it is wackily unconventional, hasn’t had it’s most wackily unconventional character more accepted.

Hoo-man preconceptions obscure that Noranti is actually a talented wise woman. She’s clearly tuned in to different wavelengths and is aware of things others can’t see. She showed that on Arnessk where her second sight saves countless lives and rights an ancient wrong.

Noranti offers her training to the Moya family and receives the typical Moya frell-off response.

Nevertheless, Noranti persists and assists, if you could call it that, the family, mostly Crichton for whom she develops a strange fascination. She messes with his mind, but to wake him up from his absurd fantasy about Aeryn becoming a normal human wife. She could tell that Aeryn was pregnant and, having a similar power as the Ancients have, she implanted a memory into Crichton’s mind that <Aeryn is with child>.

And let’s not forget that Noranti figured out the connection between the inhabitants of Qujaga and Arnessk. Without Noranti’s wisdom and assistance, Crichton’s heroism in the Peacekeeper-Scarran War would have been for not.

Three Stooges? Yes, but Stark, Jool, and Noranti are, despite their flaws, integral to the Farscape grand story arc. Scoff at them, sure, but don’t dismiss them.