Farscape and What It Means to Be a Person, Part 1 » Farscape Continues Skip to content

Farscape and What It Means to Be a Person, Part 1

Since ancient times, philosophers have pondered the question of what it means to be a person. David Hume observed that we cannot say much definitively about our world because we do not have other worlds with which to compare it. (Hume, Dialogues Concerning Natural Religion, 30) This is especially true about intelligent life because we know of only one intelligent species: us. Science fiction, because it can step outside our ordinary world, can show us who we as humans are. This is especially so when it shows humans interacting with aliens. Science fiction can at least speculate on what alien worlds and alien intelligences are like and give us ways to contemplate our own humanity and what it means to be a person.

The 1999-2004 television series Farscape is excellent at portraying what it means to be a person because for almost the entire series, there is only one human being involved in the action, forcing us to see aliens through his eyes. Science fiction commonly portrays human-alien interaction as aliens entering the human world. Farscape reverses the mise-en-scène by having the protagonist enter the alien world. In this, Farscape is like Edgar Rice Burroughs’ John Carter of Mars series in which a person is transported to another world and is forced to quickly learn how to survive. But quite differently from the John Carter series, Farscape does not portray a human conquering primitive aliens.

In its 88 episodes and three-hour film, Farscape explores what being a person means in terms of ethics and identity, and what it means to affirm or deny that another is a person. It is a story of love, solidarity, recognition, and the struggle to find peace within the threat of war. What Farscape most shows us is how the person one is is a product of one’s choices and actions.

We recognize Crichton is a person. But because we have experience only with human persons, we recognize only beings who look like us as persons. However, as Harry Frankfurt points out, the attributes we use to define a person are the attributes that are the subject of our most humane concern with ourselves and the source of what we regard as most important and most problematical in our lives. Now these attributes would be of equal significance to us even if they were not in fact peculiar and common to the members of our own species. What interests us most in the human condition would not interest us less if it were also a feature of the condition of other creatures as well. (Frankfurt, “Freedom of the Will,” 6)

The other characters of Farscape are aliens but also persons in that they have the same attributes that we regard as most important and most problematical in our lives. Moya is a spaceship but also a person. Moya is alive, is intelligent, wills, feels fear and worry, and is capable of enjoyment and love. Moya even has a child in the show, another living spaceship named Talyn. Moya can communicate to the others only through Pilot, whose sentient species sends its best persons to serve on Leviathans by biologically linking with them in a lifelong symbiotic relationship. Pilot is a person. Despite his consciousness being joined with Moya’s, he has his own will and desires and Moya and Pilot are occasionally at odds with each other. (“Bad Timing,” 4.22) Zhaan is a plant but still a person, in nearly every respect a humanoid being with intellect, will, and emotions like ourselves. The Sebaceans, Luxans, Hynerians, and other species of crew members we meet in the series—Nebari, Banik, Interion, and Traskan—are, despite their different appearances, more easily recognizable to us as being persons because they act like us and have the same concerns as us.

But beyond the basic characteristics that define a person, what are the ethical and existential implications of what it means to be a person? A person has a distinct identity and consciousness of their self, but both of those are generated and defined through interactions with other persons and are therefore contingent and malleable. Farscape understands this and deviates from the typical literary form of conflict between good hero and evil villain. Farscape shows that the line between being a good person and an evil person is easily crossed, and it demonstrates in surprising ways that monsters are created and that evil is often an emotional response to unresolved pain.

Christine Korsgaard’s answer to what it  means to be a person is that it is as the possessor of a personal identity that you are the author of your actions, and responsible for them. And yet at the same time it is in choosing your actions that you create that identity. What this means is that you constitute yourself as the author of your actions in the very act of choosing them. (Korsgaard, Self-Constitution, Kindle locations 375-377) What this means is that persons are not mere objects pushed around by physical forces, something too many philosophers and scientists have forgotten. As beings with free will, persons make their own choices and their decisions mold their character and chart the course of their lives. We see that vividly in Farscape. Who we are as a person is a product of the dynamic between the social environment and our own choices in response to events around us. We have a significant hand in making who we are. 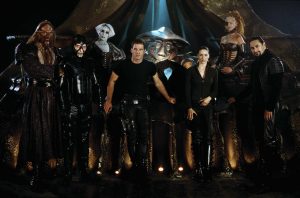 Each person in Farscape is forced by circumstances to make difficult choices in response to extreme situations, and these choices help constitute their selves. As Georg Wilhelm Friedrich Hegel describes, our sense of self requires interaction with others to  socialize us into proper ways of behaving. (Hegel, Phenomenology of Spirit) Following Hegel, Axel Honneth describes our practical identity as depending on receiving recognition from our society’s institutions. We learn from our culture which behaviors and traits are valued and which are not. We receive recognition when we act appropriately. Through recognition we are socially accepted, allowing us to navigate our social environment successfully and form a sense of self and social relationships that better enable us to achieve our goals. (Honneth, Struggle for Recognition, Disrespect, The I in We)

Our dependence on others to constitute our sense of self means that our sense of our practical identity requires an amount of faith in the social environment and institutions. Each person on Farscape has had that faith shattered, making their choices, and thus their identities, fragmented and fragile. Each person on Moya is in involuntary exile, and, what is more, each does not know how to get home or if they even can go home.

John is the most exiled, completely out of his element and potentially cut off from Earth forever. The others are at least in a cultural universe they are familiar with, though they are each cut off from their home in that universe. D’Argo is falsely imprisoned by the Peacekeepers after his is framed for murdering his wife. Rygel is the legitimate ruler of the Hynerian Empire but he was deposed in a coup by his cousin and imprisoned in a deal with the Peacekeepers. Zhaan did commit the crime for which she is imprisoned, assassinating a tyrant leader, and the political nature of her crime means she cannot return home. Pilot is on Moya against the wishes of the elders of his world, so he, too, is cut off from his home. Chiana joins Moya late in Season 1 when the crew rescues her from Nebari authorities who are forcibly taking her back to be mind cleansed because she is a culture dissident. Chiana does not want to go home but that her home considers her a criminal affects her deeply. Aeryn is deemed by the Peacekeepers to have violated their rule against contact with unclassified alien life forms (namely Crichton), and she is ruled irreversibly contaminated and exiled. Having nowhere to go, she remains on Moya only to find out later that for that, the Peacekeepers declare her a traitor. The injustice of these condemnations is not lost on Aeryn, and it shakes her faith in the social institutions in which she was raised and her sense of what is good and proper.

Each person on Moya needs to choose how they, isolated from their culture, will act and constitute themselves. Each needs to answer for themselves the question of what it means to be a person.

Continued on Farscape and What It Means to Be a Person, Part 2