In: Characters
Tagged: Crichton
With: 5 Comments

John Crichton is Farscape’s clear protagonist, but Crichton is neither the classic hero nor antihero. Crichton is Everyman. Crichton is the lone human in an alien landscape. The closest science fiction series to Farscape in having a lone human protagonist, Edgar Rice Burroughs’s Martian books, had a classic hero. In many respects, those stories were more westerns than science fiction. Carter is a cowboy who befriends a native and fights off hordes of savages to rescue and win the woman; a classic strong, fearless patriarchal hero who saves Mars, unifies its warring tribes, and becomes the planet’s leader. Carter, like many science fiction protagonists, is a soldier. Crichton is not. He is a scientist; granted, he is a tall, handsome, clean-cut, rather non-geeky scientist who looks the part of a leading man, but he must learn how to survive by being adaptable not by being brawny. Crichton is not a conquering hero, and despite also wanting, at least at first, simply to go home, he is not an Odyssean descendant of the gods and military leader.

Crichton is also not a lost prince, wizard, savior, or fulfillment of prophesy. He is a normal person. Crichton is a bit smarter, braver, and more resourceful than the average person (traits necessary for a plot), but Crichton is us. The character’s name is no accident. The Oxford English Dictionary defines “Crichton” as follows:

[beautifulquote align=”full” cite=””]Crichton. allusively. More fully “Admirable Crichton.” A person who excels in all kinds of studies and pursuits; (in later use esp.) a person of an inferior social status or lower place in a hierarchy who is far more talented and capable and has more natural authority than his or her superiors. (Oxford English Dictionary, “Crichton”)[/beautifulquote] 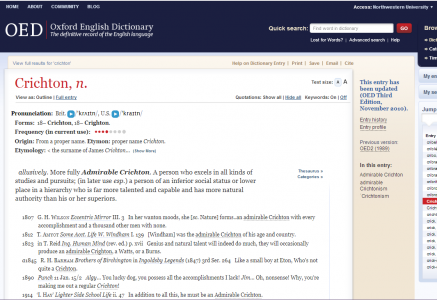 John Crichton is Everyman. Crichton is us—human representative to the rest of the universe. He responds much as we would to the persons and events around him, though his knowledge of theoretical physics gives him a distinct advantage over us and becomes central to Farscape’s grand story arc.

Crichton is also not an antihero because, although he is away from Earth against his will, he is never reluctant to do what he sees as morally right and help others. No matter what happens, Crichton never loses his strong idealism and sense of ethical responsibility toward other sentient beings. He never forgets that they are persons like himself despite being different. Fighting is not his first choice, or even his second or third, but he does not back down from a fight. He also, most importantly for the series, is not reluctant to come to trust and form connections with the aliens he meets. Crichton earns their respect and trust, and, for us, he is an admirable figure despite his many failings.

Crichton is the son of a hero—an astronaut who walked on the moon. But this patrilineage only explains how Crichton had access to the space program to conduct his experiments. He, in fact, though loving and admiring his father, feels that being the son of a hero is a burden. He can never be his father’s kind of hero. However, in the first episode before he leaves Earth, his father tells him that “each man gets to be his own kind of hero” (“Premiere,” 1.1), and this is almost a thesis statement for the series as not just the younger Crichton, but each character in Farscape gets to be their own kind of person.

In episode 1, Crichton is in a space module in Earth orbit trying to prove his own scientific theory of faster space travel, He turns out to be more right than he realizes when he is shot through a wormhole into a distant part of the universe. The episode opening credits in Season 1 sum up Crichton’s dilemma:

My name is John Crichton. An astronaut. A radiation wave hit and I got shot through a wormhole. Now, I’m lost in some distant part of the universe on a ship, a living ship full of strange alien life forms. Help me. Listen, please. Is there anyone out there who can hear me? I’m being hunted by an insane military commander. I’m doing everything I can. I’m just looking for a way home. (Season 1 opening credits)

The strange alien life forms referred to are the ship Crichton’s module is pulled into and the ship’s inhabitants. The ship is Moya of the bio-mechanoid species Leviathan who spend their entire life cycle in space. Leviathans are sometimes captured and enslaved by Sebaceans, who are organized politically as the military organization known as the “Peacekeepers.” They have enslaved Moya to serve as a prison ship and as luck would have it, Crichton has emerged from the wormhole right as the prisoners of the Peacekeepers on Moya have commandeered the ship and are attempting to escape. They bring Crichton’s module on board, hoping his strange craft might help them. The three escaped prisoners are Ka D’Argo, a Luxan warrior; Pa’u Zotoh Zhaan, a Delvian priestess; and Dominar Rygel XVI, the deposed ruler of the Hynerian Empire. As soon as they realize Crichton cannot help them, they lose interest in him, though they are not so barbaric that they cast him off the ship. They are not at all trusting of Crichton, especially because humans look like Sebaceans. They are even less trusting of Aeryn Sun, a Peacekeeper fighter pilot who they capture during their escape.

The insane military commander referred to is Captain Bialar Crais, a Peacekeeper commander, who swears vengeance on Crichton because shortly after Crichton’s module emerges from the other side of the wormhole, it is clipped by Crais’s brother’s fighter craft, causing the latter to crash into an asteroid, killing him. That Crichton was utterly blameless in his brother’s death is irrelevant to Crais, at least at first, and he pursues Crichton to kill him, which means he is pursuing Moya and its new crew.

Adapting to his new post-wormhole reality, Crichton realizes his first task is to stay alive in a hostile terrain. Caught in a culture he knows nothing about, between his new companions who are not exactly his friends, and the pursuing Crais, Crichton has to reinvent himself. He is not special or chosen, he is simply there. He cannot draw on any special powers or even superior strength for a human. Cut off from everything human, he must find his own way and create his own self to survive. Stripped of the structure of his cultural norms, he has no formula to fall back on, and he uncovers the core of who he is and what it means to be human among the aliens.

On this blank canvas, Farscape creates a grand story and numerous subplots to explore what it means to be a human person. Because John Crichton is Everyman, not a superhero or savior, we, the audience, see him rather than the trappings of a paradigmatic hero. We can see ourselves as him and in his situation. We can understand John Crichton’s journey as a person’s journey emblematic of us rather than the journey of a hero detached from our lives.