In: Philosophy of Farscape
Tagged: Crichton, Factscape
With: 0 Comments 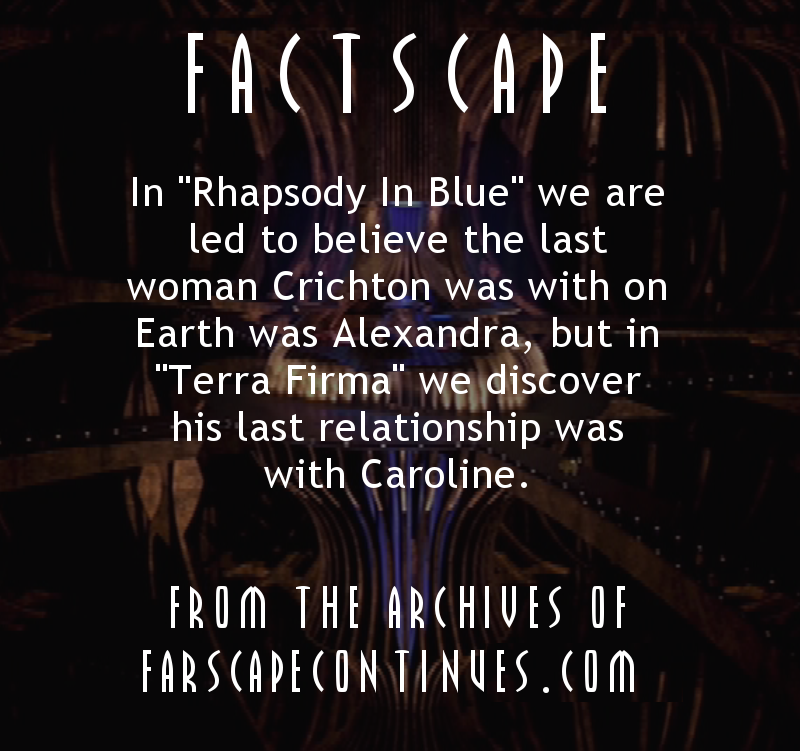 Which Was Crichton’s Previous Relationship?

In “Rhapsody In Blue,” (1.12) the dreams the Delvians placed in the minds of Moya’s inhabitants was of their last sexual encounter. For D’Argo, it was very emotional (his wife the night before she was murdered). For Rygel, it was not at all emotional, he doesn’t even mention her name, it was just one of his wives; we know he had at least 23 (“Dream A Little Dream,” 2.08). For both D’Argo and Rygel, those would be their last sexual encounters before they were arrested by the Peacekeepers. In “Rhapsody In Blue,” Crichton dreams of Alexandra and so we are led to believe that she was the last woman Crichton was with on Earth. But in “Terra Firma” (4.13) we discover his last relationship was with Caroline.

Crichton wanted to marry Alexandra but she took a position in California, while he went to Florida to begin training for the “space program,” i.e. – astronaut training so he could go into space to test his theory “to use our planets gravity as a speed booster, sling-shotting him off into space at previously unrecorded speeds.”  It would have been years between when Crichton entered the space program and his launch of Farscape One.  If this article is correct, somewhere between three to five years, then more years waiting for clearance for his flight, though Father Crichton may have helped speed all of this up.

So, it is no surprise that Crichton would have had another relationship during those years. That would be Caroline. But that’s where the quandary is. He never had sex with her all those years?

Crichton was clearly not prudish about sex out of wedlock with Alexandra and there is no reason to believe that Crichton, who is clearly a typical male in his obsession with sex (“Back and Back and Back To The Future,” 2.05, “Revenging Angel,” 3.16) would have gone celibate all those years. It is not difficult to assume he had sexual relations with Caroline.  In “Terra Firma,” Caroline said her relationship with Crichton was ” No strings, no plans. Just good casual times.” That can mean many things, but “no strings” usually implies a sexual relationship. She obviously greats him as though they were physically intimate in “Terra Firma.” I think it reasonable to conclude that Caroline, not Alexandra, was Crichton’s last sexual encounter before leaving Earth.

Was this a mistake by the writers? They usually do an excellent job of keeping track of continuity issues. One could argue that the Delvian mind frell exploited one’s memories of one’s last meaningful sexual encounter. That would require Rygel to have had deep emotional attachment to the woman with whom he had his “final mating session.” That seems unlikely.

I suspect the writers made a conscious choice to have two different women to serve the same purpose in two different situations. That purpose is a foil for the tension between Crichton and Aeryn. In “Rhapsody In Blue,” they had no relationship yet, though an obvious mutual interest. That tension is offset by Crichton’s past failed romance with Alexandra and of course in Season 1 he was still strongly connected with Earth. In “Terra Firma,” Crichton is trying to squelch his feelings for Aeryn but was not succeeding. His connection with Aeryn was deeply conflicted as now was his connection with Earth. Caroline said in “Terra Firma” that he was spending time with her on his return, being the polite gentleman and testing his feelings. Caroline knew–a woman does–that Crichton’s heart still was with Aeryn. Caroline also provides the opportunity for someone to tell the suffering Aeryn that fact. The Alexandra we saw in “Rhapsody In Blue” would not have fit that role well in “Tera Firma.”

Regardless, fun to speculate.