In: Characters
Tagged: Braca
With: 0 Comments

Text Transcript
Farscape’s main characters each traverse a roller coaster of emotion and internal struggle. Not Braca. At least not as far as we know. His roller coaster is one of shifting loyalties as he tries to navigate Peacekeeper service.
Now, Braca is never one of the inhabitants of Moya. Even Scorpius lived on Moya for a bit. Braca  is a Peacekeeper,  a cog in their war machine. In the original series he is always someone’s second. Like Scorpius,  he is a survivor. The actor who played Braca, David Franklin, says that if the series hadn’t been unjustly cancelled,  it would have given us some of his backstory. Absent that, we can still ask what kind of person is Braca, and how can we understand his apparently shifting loyalties from Season 1, through the Peacekeeper Wars, and into the comic books.
Spoiler Alert 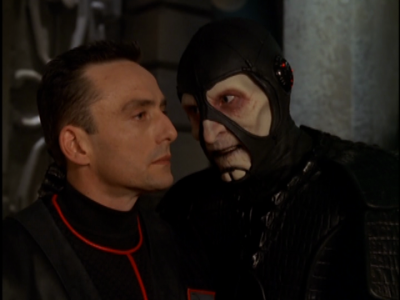 We first see Braca in “Bone to Be Wild” as Crais’s #2 after Lt Tieg’s untimely demise. But we don’t learn his name until 13 episodes later when Scorpius mentions it. We never hear his first name until the penultimate episode of the original series. Braca becomes Scorpius’s #2 after the half-breed ousts Crais. Braca rolls with the change. Whether he likes it is irrelevant because he doesn’t ask questions.
Then, when Scorpius is ousted by Grayza, Braca becomes her #2. During the first three seasons of the original series, he seems to be the lapdog for whomever is in charge at that time. He’s there, a tin soldier taking orders.
It is in Season 4 that Braca starts to develop a story. As Grayza’s #2,  he increasingly faces a dilemma of to who and what he is loyal. We are deprived of hearing his own thinking, but we can piece together a bit of his conflict.
He becomes a captain, we can assume promoted by Grayza to replace Scorpius.  There is this deleted scene from “Crichton Kicks” in which he tells off Scorpius. Grayza is listening in, and Braca probably knew that. Later, Braca plays the part of tormentor of Scorpius. Again, Grayza is hovering over.
But then there’s this scene with Scorpius in the core of Moya. suggests that his telling off of Scorpius is a show for Grayza. 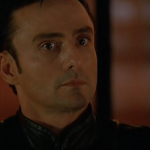 Braca’s opposition to Grayza does not preclude him from following her orders. And for this reason and others, some accuse Braca of being a brownnoser, but I think that’s unfair. By that logic, isn’t Aeryn Sun also a brown noser? Remember, Aeryn didn’t leave the Peacekeepers voluntarily; she was thrown out. She turned in Valorek to get a better assignment and she once sucked up to Crais as much if not more than Braca did.
Like Aeryn, Braca was a cog in the Peacekeeper war machine. Like Aeryn, Braca was the best Peacekeeper he could be. He did what he needed to do to survive. Also like Aeryn, he believes in and is loyal to the higher ideal of justice. The Peacekeepers do not live up to their name, they only know how to enforce peace at the muzzle of a gun. How much Braca buys into the Peacekeepers’ alleged mission is unknown. But we do learn something in “We’re So Screwed.” 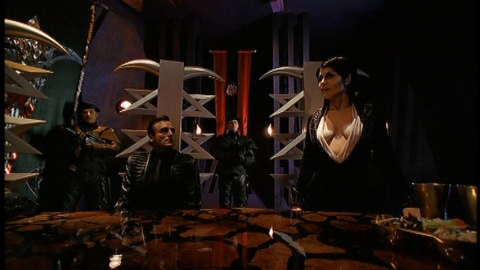 He is Grayza’s attache on Katratzi. But she is not why he’s there. Crichton and Aeryn had figured that out.
The taunting is not fair. Understandable their distaste for Braca siding with Scorpius, but given the alternative–Grayza–Braca’s choice makes sense. Braca is ultimately loyal to the men and women of the Peacekeepers. He can see that Grayza’s chosen path is foolish and won’t stop the Scarrans from attacking. Right or wrong, Braca sees no better alternative to save lives than Scorpius’s strategy to develop a wormhole weapon.
Braca’s distrust of Grayza is confirmed when she gives orders to break the truce and attack the Scarrans.
Braca, facing the toughest possible dilemma for a second-in-command, relieves her of command. In this true test, Braca was not a brown noser. He chose the lives of the men and women who serve under him over the vein-glory of honor. 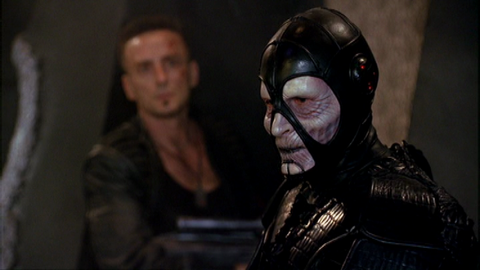 After Grayza is deposed, Braca returns to being Scorpius’s #2. He fights alongside the others on Qujaga, it is here that he seems to come to a realization. It is only much later in the comic books that he is able to speak his own mind freely. Then, later sill we finally hear his internal dialogue. One could interpret his thoughts as self-serving, though he echoes something Aeryn once said that service and promotion was her highest ambition. Perhaps that is all to which a Peacekeeper could look forward. But Braca again shows us that like Aeryn, his career ambition was to serve a higher mission. When he became convinced that he couldn’t serve that mission within the Peacekeepers, he left.
Braca was a Peacekeeper, but it doesn’t seem accurate to call him a villain. He follows orders and he doesn’t ask questions, but he doesn’t follow immoral orders. Ironically, Scorpius doesn’t make immoral orders to Braca. Grayza does, and he revolts. Braca puts the lives of his crew over following Grayza. His obedience ultimately is to the ideal of the Peacekeepers.
Watch all of the Farscape Continues character study videos.
2020-07-02
Previous Post: Farscape’s Three Stooges?
Next Post: Pilot