Aeryn Is a Feminist and Chiana Is Not

One of the joys of Farscape is that it has numerous strong female characters. Zhaan, Aeryn, Chiana, Sikozu, and even Jool at times show independence and strength. I wrote about Zhaan and Aeryn before, and I will write about Chiana soon. Here I am going to focus on comparing and contrasting how Aeryn and Chiana approach themselves and the universe. Much discussed are the questions of what being a feminist means and who is and is not a feminist. To offer some small insight into these big and highly controversial questions, I will look at two characters in the TV show Farscape—Aeryn Sun and Chiana. Each in her own way speaks to what it is to be a woman and how to be, and not be, a feminist woman.

Why Chiana Is Not a Feminist

In some ways, Chiana acts how some think a liberated woman or a feminist would act. She is autonomous, she sees herself as the equal of men, and she won’t let herself be dominated by men. For these and other reasons, Chiana is a likeable person. Undeniably, Chiana projects power, but what is the power that she projects? This, I say, is the important consideration because being a feminist is not about power itself, but a certain type of power.

When we first meet Chiana, (“Durka Returns,” 1.15) she is almost a wild creature being dragged aboard Moya by her captors from Nebari security. They have abused her, and we see Salas torturing her. Chiana’s mistreatment certainly contributed to her unstable emotional and mental state. We learn in the episode, however, that free from her captors, she is selfish and manipulative to the point of duplicity. It becomes clear that Chiana has one way of dealing with other women and a different way of dealing with men. She tries to use sex appeal to manipulate Crichton. He, of course, is having none of it. But this establishes a pattern for her.

“Tralk” is one word for the role Chiana learned to play. It is not all about sex for Chiana, but sex certainly is a big part of it. In short, Chiana manipulates men to get what she wants or needs. Except for being briefly tempted by the sexual predator, Talikaa, Chiana is interested only in men, and not just for sexual gratification but in general. Out of the blue, Talikaa asks Chiana:

Chiana obviously likes sex—as she says multiple times, she needs it. A woman enjoying sex and openly expressing her sexuality is a good thing. It is feminist to overcome the suppression of women’s sexual freedom. However, Chiana is doing more than simply enjoying sexual freedom. She also uses her sexual appeal as a tool to manipulate others. We saw this in her first appearance, when she tried to play the tralk to manipulate Crichton. 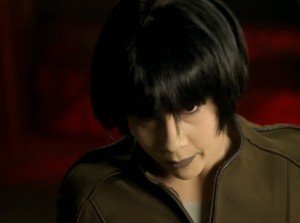 We see her in full force for the first time in “Nerve” (1.19). She convinced Crichton to take her along to the Peacekeeper base as a “talented burglar and distraction-causer.” She proves herself useful as burglar and temptress, distracting the base commander, Javio, by pretending to be Crichton’s “personal servant” (tralk) and flirting with Javio.

Chiana plays either the flirt or a full-on tralk in quite a few episodes throughout the TV series, continuing the behavior as late as “A Perfect Murder” (4.09), when she is banished for her “many indiscretions.” D’Argo’s response to Chiana—“No wonder you’re thrown off every planet you land on!”—indicates both that Chiana’s many indiscretions extend beyond what we are shown in the episodes and that her behavior causes them all more harm than good. 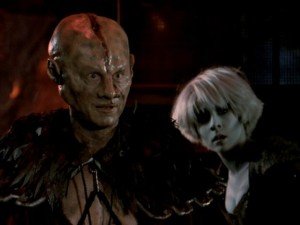 We learn in “Home on the Remains” (2.07) that this is how Chiana has been for “a long time.” Chiana ran away from Nebari with her older brother, Nerri, when she was quite young. She says she “just followed him” and did not have any courage of her own (“Taking the Stone,” 2.03). Perhaps Chiana picked up bad habits from Nerri. She says they were good at running and hiding and, more than all else, engaging in carnal contact across the galaxy (“A Clockwork Nebari,” 2.18). She can be a nice person, but she has slept and stolen her way across the galaxy for cycles. Life has not been all that good for her. Life has hardened her. Her motto at the beginning of her time on Moya is to avoid any situation that she cannot “kiss or kick or cry my way out of” (“Through the Looking Glass,” 1.17).

Sex, for Chiana, is not about liberation but about power. Flaunting her sexuality gets her attention, gets her food and other means of survival, affords her distractions when needed, and helps her to manipulate others. Open sexuality is a good thing. Using sexuality as a tool or weapon is not a good thing. Chiana’s sexual expressions are not all bad, but too many of them are, which creates problems for her and those close to her. Chiana’s expressions of power are reactive, not proactive and they have not given her peace or security.

As late as Season 4, Chiana is still obsessed with sex, or perhaps stuck in a habitual way of behaving. As Chinese philosophy says, one’s strengths are also one’s weaknesses. We see in “Twice Shy” (4.14) the sexual predator, Talikaa, use Chiana’s sexuality to manipulate her. When Aeryn tries to intercede on Chiana’s behalf, Chiana turns on Aeryn, clinging to her perceived need for sex, saying, “You don’t need it. I do! It’s not a crime.”

Chiana has a point. Chiana is needy. Aeryn is not. And that difference is not just about sex. Chiana needs the approval of others to define herself because she is primary reactive to others. Aeryn does not have that need.

Why Aeryn Is a Feminist

Many negative things can be said about the Peacekeepers and their culture. One positive is that they practice complete gender equality. Women and men are equally represented in all branches of Peacekeeper society. Women serve in combat and support roles side by side with men. Women are officers equally with men (the only high-ranking officer we meet in the first TV series is Commandant Grayza, but we meet other high-ranking women in the comic books). Aeryn never faced, or saw others face, gender-based discrimination. Aeryn’s problems in the Peacekeeper ranks had nothing to do with her gender.

In Aeryn’s worldview, women are already equal, and she acts accordingly. She is not oblivious to how men can be misogynistic, but she does not play the game of manipulation within that dynamic as Chiana does. The game of manipulation and power is invented and perpetuated by men for their benefit. Aeryn ignores the game, unless she is fighting to end it. Aeryn is not there for men to ogle—don’t even try it.

This refusal to play the power-manipulation game is, I contend, one of the most important parts of being a feminist. When playing the game, Chiana remains entangled in it. (Think “John Quixote” (4.07), but I doubt the scriptwriters are making an analogy with misogyny.) What power Chiana can grab or express within the power-manipulation game is fleeting, and she remains stuck in the game. Her manipulation of men perpetuates misogynist gender roles and leaves her under their constraints. On our Earth, certain female pop singers are selling the lie that playing the “tralk” onstage or on-screen is “feminist” or empowering. Playing the power-manipulation game may make them some money, but, ironically, it makes more money for the men who own the record labels, and these women remain objectified by men.

Aeryn’s situation is in some ways different from Chiana’s and in other ways similar. Both come from highly structured societies that limit individual freedom. They differ in that Aeryn was satisfied with her place in that society but Chiana was not, though Aeryn soon comes to realize her satisfaction in being a Peacekeeper was an illusion. Each arrives on Moya exiled and forced to survive on her own. Like Chiana, Aeryn, at first, is cold and distant from others on Moya. Despite their similarities, Aeryn expresses her self-interest and power in ways different from Chiana’s behavior.

As I discussed in my earlier article about Aeryn, she has to adjust to a radically different life after she is forcibly exiled from the Peacekeepers. In the Peacekeeper ranks, she had rules, and if she followed the rules that made everything right.(“Green-Eyed Monster,” 3.8). She was fortunate that the strict, all-encompassing Peacekeeper rules did not oppress women for their gender—though they oppressed personal freedoms in other ways—but to Aeryn’s credit she rejected those restrictive rules once she became aware of their effects.

Aeryn’s realization about her life as a Peacekeeper and how she  responds to that realization are analogous to feminist women’s realizations about their lives under misogyny. Aeryn was given a role, trained from birth to accept her place in the social hierarchy. She was taught to suppress certain thoughts and emotions and to never question any of what she was taught. Aeryn had to be pitched out of the Peacekeepers to become aware of the oppression in her society. It is difficult when immersed in a society to realize what it is doing to us. People become aware in myriad ways. Aeryn’s experience is hardly typical of real-life human women, but she offers a positive role model.

Given the experience of freedom, Aeryn embraces it in a positive manner. Unlike Chiana, who indulges in debauchery and manipulation, Aeryn constructively uses her freedom from oppression. Aeryn uses her power to help people. She is not manipulative or vindictive (with one exception), and she maintains a strong moral sense of acting to help others. She acts to save lives in a number of episodes, most notably “Sons and Lovers” (3.02) and “Into the Lion’s Den, Part 2” (3.21), where she, more than the men in the episode, leads the effort to save others. << SPOILER > In the comic books, Aeryn attempts to convince other Peacekeepers about the falsity of their society and to embrace another way of life with more freedom and fairness. >>

Aeryn did not seek power, did not try to manipulate others. She drew on her own strength, developed self-awareness, confronted her oppressors, and worked to bring others into their self-awareness. In my opinion, those are some of the signs of a feminist and Aeryn is a feminist. I freely admit that Aeryn is in many ways less than a perfect analogy for women on our real-life Earth. However, I still think there is value in considering her example in a time when the corporate media try to co-opt the label “feminist” to signify women who behave like Chiana, not ones who act like Aeryn.

N.B. – To all the Chiana fans: don’t get me wrong, I love Chiana. She’s a sweetie. But she needs to grow up.

P.S. – Have you noticed how Aeryn and Chiana seldom appear in a two-shot together? Even when they are in a alone together in a scene, they are shot alternately over the shoulder or close ups. See, for example, their deep conversations in “Natural Election.” (4.06) In contrast, all of the other character pairings are frequently shown in two-shots. Interpret that how you will.