In: The Show
Tagged: Comparisons
With: 0 Comments

How far is 60 Cycles From Earth?

So question one: where is all of this taking place?

<Crichton: Where are we?>

In several previous videos I’ve mentioned how I admire Farscape for not getting too bogged down in technical details.

The characters and their stories always take precedence over special effects, arcane physics fantasies, or technical hardware. That’s part of why Farscape is such a great show. So we are never given a map showing where we are or a technical explanation of how anyone gets anywhere. How far away is all of this from Earth?

We are given only one hint, from Scorpius:

< Scorpius: Even without wormholes, Earth is reachable. At top speed – just over 60 cycles. >

Okay, 60 cycles travel time. But we have no idea how fast top speed is or anything about how fast any of the ships go. Obviously they have faster-then-light travel. How it works is never explained.

< Hetch drive – popping out for groceries >

Even traversing long distances takes less than a day, as implied several times in the original series.


So when Scorpius says it would take 60 cycles to travel to Earth, he has to be talking about a massive distance.

I tried to calculate how massive a distance that is but I’m a philosopher not a mathematician so my first attempt was derailed by my mathematical error. < Idiot! > Yeah, I know, so here’s a different approach to the problem to calculating what is top speed.

Our top speed number has to fit two criteria: On one hand top speed can’t be so slow that other stars aren’t a short time away as shown throughout the series. But on the other hand we know that Earth is in the same galaxy as everything Farscape. < Yondalao in PKW > Top speed can’t be so fast that 60 cycles would take us way outside the galaxy.

The fastest speed mention in the original series is Hetch 9, in Premiere. And with that reference I’ll try to start. When they try Crichton’s slingshot maneuver, they reached a gravity-boosted speed of Hetch 9 halfway in and then exceeded it before they pulled up, slingshotting at even greater speed out toward the Uncharted Territories. There are variables we don’t know, but we do know it took them about a minute to go from however far they got back to the commerce planet.

How far they got is the big unknown variable and it turns out to be the key to the whole thing. I tried calculations based on the distances from Earth to Jupiter, Pluto, and the Oort cloud, but they didn’t work being either too slow or two fast for our criteria. What does work is to assume they got the equivalent of a tenth of the way to the Oort cloud or five times farther than Pluto which is 200 AU or 1,600 lm distance. So they returned to the planet at roughly 1,600 times the speed of light. These are all ballpark estimates but it seems that Moya would have great difficulty holding together at speeds above Hetch 9 and since we have nothing better to go on let’s say that Hetch 9, or 1,600 times the speed of light, is top speed. 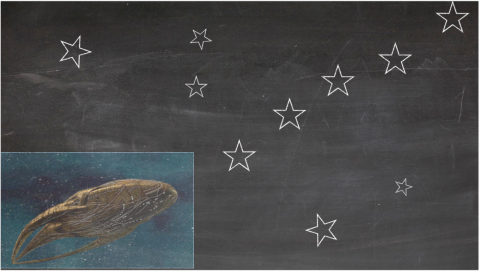 Even at 1,600 times the speed of light it would still take us about a day to get us to our nearest star, Alpha Centauri. Astronomers calculate that four light years is an average distance between stars, so 22 arns may be a little long for what Crichton calls “popping out for groceries” but it’s not insane and generally fits with the actions in the original series. That speed doesn’t easily work for the scene about getting to Arnessk in 10 arns, they had to already be within that stellar system, but we all know about plot conveniences.

But the 1,600 times the speed of light number works for Scorpius’s statement about getting to Earth in 60 cycles with Earth being in the outer spiral. Travelling 1,600 times the speed of light for 60 cycles would take you a distance of 96,000 light years. The width of the Milky Way galaxy’s main spiral arms is between 100,000 and 133,000 light years. So, if Earth is in one of the galaxy’s outer spirals and the Farscape action is occurring in the spiral on the other side of the galaxy, that fits. To travel between them without wormholes, one would have to go around the radiation-soaked galactic center, requiring a diversion of 10-20,000 light years so a 96,000 light year journey is well 1.within the realms of possibility.

Anyway, that’s what took me too many arns for my mathematically challenged mind to calculate. Hetch 9, top practical speed, is about 1,600 times light speed. Not a perfect solution, but functional. What do you think?

2020-10-02
Previous Post: FarscapeNow? Nostalgia Ain’t What It Used to Be
Next Post: A Non-map Map of Farscape